Many a time, while speaking in Parliament as an MP, I have asserted categorically that India is respected across the world because of its good foundation in higher education.

Many a time, while speaking in Parliament as an MP, I have asserted categorically that India is respected across the world because of its good foundation in higher education. Today, India has been elevated from a “snake-charming” country to a software giant, only because of its education system. Every Indian takes pride in Google’s Sundar Pichai, Microsoft’s Satya Nadella, PepsiCo’s Indra Nooyi, Albertsons’ Vivek Sankaran, Micron Technology’s Sanjay Mehrotra, Master- Card’s Ajay Singh Banga and Adobe’s Shantanu Narayanan. They are all products of quality public higher education in English medium. Services contribute to almost 53 per cent of the GDP, which again depends on the quality of services related to proficiency in English education.

Is compulsory education in mother tongue or regional language a boon or bane?
Well, this is the debatable portion of an otherwise progressive National Education Policy. India sees unity in diversity and has around 22 officially recognised languages. We have mother tongues, state languages, national languages, and of course, the international language of English. If a child is taught in the state language till Class 5, and switched to the English medium afterwards, what would be the repercussions on his/ her ability to learn? Of the 58 lakh students in Telangana, around 50 to 60 per cent are studying in English medium.

It is better to teach English as a second language or the medium of instruction from pre-school, because then, students would not have to spend more time on language than subjects after Class 5. In terms of language learning skills, children reach 50 per cent capacity by age 4 and another 30 per cent by 8. As English is the Lingua Franca of the world, proficiency will help children in many ways. New tools of language learning, like videos, apps, video games, teaching aids, phones, TV, in addition to post-Covid online teaching, are going to play a huge role in getting education to even the most remote part of the country. 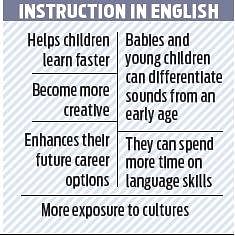 In general, the NEP-2020 is flexible, creative, and more productive. At the same time, English being a pan-Indian language, implementation of NEP-2020 with the States’ freedom to choose the medium of instruction from pre-school will help make SDG Goal 4 a reality. As the Prime Minister said, the mantra should change from “what to think” to “how to think”.

Mis tuits
India: NEP: Why education in English is a must – Sarraute Educación María Magdalena

Sarraute Educación India: NEP: Why education in English is a must
A %d blogueros les gusta esto: