– The UK reported its largest weekend rise in new infections since May, with 1,715 people testing positive for the virus.

– France’s education minister, Jean-Michel Blanquer, admitted it wouldn’t be viable for all of the country’s schools to reopen safely from Tuesday amid a growing number of new infections.

– Schoolchildren in Scotland should not be told to go home if they refuse to wear a face covering in school corridors or on school transport, according to Scotland education secretary John Swinney.

– More than 90 percent of countries have had essential health services disrupted as a result of COVID-19, according to a survey carried out by the World Health Organization.

– Spain prepares to reopen its schools this week, following a six-month closure.

– France’s capital Paris has announced plans to try to make COVID-19 testing available for free in all of its 20 districts, as it looks to slow the spread of the virus.

– The leading scientist in Oxford University’s COVID-19 vaccine team has warned of an increasing risk of disease outbreaks spreading from animals to humans.

– Denmark’s Finance Ministry has forecast the country’s GDP will fall 4.5 percent this year, an improvement on its May forecast of a 5.3 percent contraction.

– Airline Wizz Air has announced it will sharply reduce its flights to and from Hungary from 7 September after the country announced a ban on all foreigners as new cases surge.

Major health gains achieved over the past two decades can be wiped out in a short period of time.

There are also a growing number of coronavirus clusters under investigation. Four active outbreaks, all outside nursing homes, were detected in the past 24 hours. That’s nearly double the previous day.

The spike comes as la rentrée gets under way in France, with people returning from their summer holidays. About 12 million students will return to the classroom on Tuesday and workers to the office, where face masks will be mandatory as of 1 September.

The country’s capital, Paris has deployed a small fleet of mobile testing labs and is hoping to have free screening in all of the capital’s 20 districts by the end of the week, as the number of new infections spike.

Starting Monday, two mobile labs will travel between the city’s districts on a half-day basis, taking swab samples. More permanent structures are also being built. No appointment is necessary and it’s free, even for those without health insurance.

The city has experienced massive queues outside private testing facilities, some five hours long, as demand for testing skyrockets amid a resurgence in cases. The city hopes the new testing facilities will relieve some of this pressure.
Nawied Jabarkhyl in London

The UK government’s “Eat Out to Help Out” scheme to encourage people to visit restaurants and pubs has been a roaring success, at least financially. During the month of August, diners were given 50 percent off their food bills up to a maximum of around $13.50. Treasury figures show it has already been used more than 64 million times. But the help ends on Monday.

Many businesses have urged the government to extend the plans amid worries they will have to close as winter approaches.

Elsewhere, gyms, indoor sport centers and swimming pools have reopened in Scotland after they were shut in late March to stop the spread of the virus.

School children in the country will also have to wear face masks from Monday. All pupils will need to wear them when on school transport, while secondary/high school students will have to wear them in corridors and shared areas but not in classrooms.

In case you missed it:

• There are ‘extremist forces’ at work, says Wang Yi 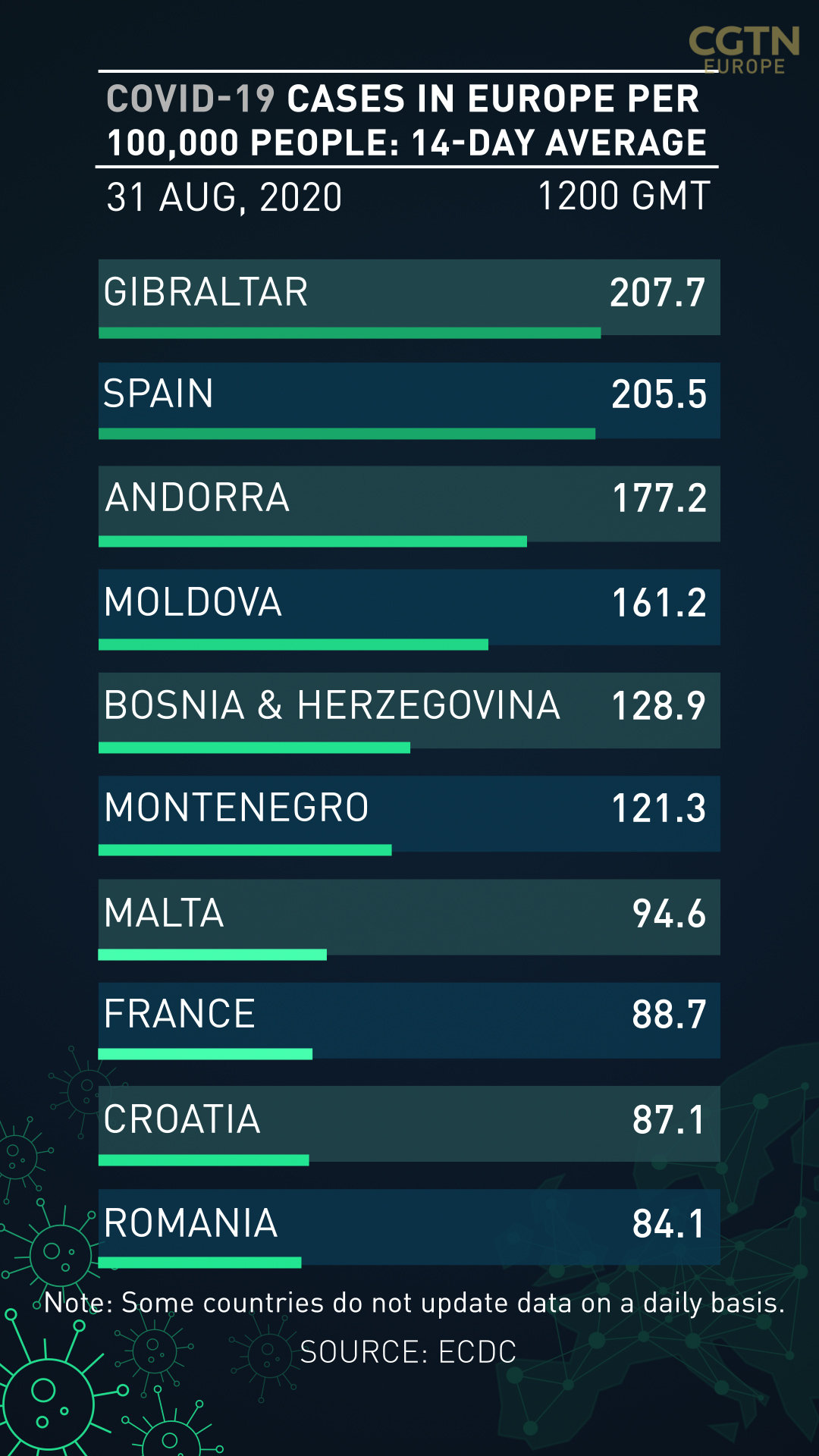 Italy’s GDP fell by 12.8 percent in the second quarter of this year. The figures, released by national statistics agency ISTAT on Monday, show the record damage that the Italian economy has suffered since the coronavirus outbreak.

Just off Italy’s coastline more than 350 migrants are stranded on a rescue vessel in the Mediterranean Sea. Some had been transferred from the MV Louise Michel, a boat funded by street artist Banksy, to another ship, the Sea Watch 4.

Activists have said that ports in Malta and Italy have refused to let them dock. On Saturday, the Italian coastguard rescued 49 people after the Louise Michel had become overcrowded.

This summer, thousands of people have crossed the Mediterranean from Africa to the small Italian island of Lampedusa, where another 450 migrants arrived on Saturday.

On Sunday, a boat of 21 people off the coast of Calabria caught fire and three people have been confirmed dead.

Hungary has registered its highest ever daily increase in COVID-19 cases.

The number of registered coronavirus infections in Hungary has risen by 292 to 5,961 over the past 24 hours, the government said on Sunday. Until now, the highest number of new infections in 24 hours was 210, registered on 10 April.

The number of deaths is unchanged at 614, and 3,759 people have recovered.

Hungary’s borders will close to foreigners from 1 September, reintroducing border protection measures in force during the first wave of the pandemic.

Under the new rules, Hungarians and permanent residents returning from abroad will have to self-quarantine for 14 days, or until they produce two negative tests taken two days apart.