Please use the sharing tools found via the share button at the top or side of articles. Copying articles to share with others is a breach of FT.com T&Cs and Copyright Policy. Email licensing@ft.com to buy additional rights. Subscribers may share up to 10 or 20 articles per month using the gift article service. More information can be found here.

The gap in education funding in England between private and state schools has more than doubled over the past decade, driven by a significant rise in private school fees, according to research by a think-tank.

The average cost of annual private school fees was around £13,600 per pupil in 2020-21, nearly twice the £7,100 spent per state school student, according to the Institute for Fiscal Studies in the report released on Friday.

The widening gulf in education funding reflects a nine per cent real-terms cut in per student spending in England over the past decade against escalating independent school fees, which rose around 20 per cent over that period.

School budgets have been hammered over the past decade, which is holding children back.

Luke Sibieta, IFS researcher and co-author of the report, said the difference in funding at sixth form, the final two years of education, was even more stark, with private, or independent, schools, receiving about three times more than state schools and colleges. “Longstanding concerns about inequalities between private and state school pupils, which have come into sharp focus during the pandemic, will not begin to be easily addressed while the sectors enjoy such different levels of resourcing,” he said.

The UK opposition Labour party has said that were it to win the next general election it would remove the charitable status that grants tax exemptions to private schools. It said it would use the money raised to invest in state education, including paying for 6,500 new teachers and expanding career advice services.

“School budgets have been hammered over the past decade, which is holding children back,” Kate Green, shadow education secretary, said. “The Conservatives have allowed young people across the state sector to be denied opportunities enjoyed by their peers.” 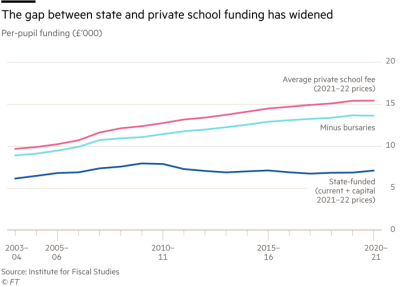 The government said it was “providing the biggest uplift to school funding in a decade” by committing £14 billion over the three years to 2022-23.

“Next year, funding through the schools national funding formula is increasing by 2.8 per cent per pupil compared to 2021-22.

The NFF continues to distribute this fairly, based on the needs of schools and their pupil cohorts.” The IFS said the gap was “probably understated” as the data did not account for private school investment income or endowments.

Around 7 per cent of children in the UK attend private schools, though the number has fallen slightly in the past decade. School fees are set by institutions and vary in size. The most expensive, such as Eton or Brighton College, charge nearly £15,000 per term for secondary school pupils from the UK and more for international students.

Geoff Barton, general secretary of the Association of School and College Leaders, called the funding disparity “pretty outrageous” and said a lack of resources meant state schools had been forced to cut back on subject choices, wellbeing support and extra curricular activities.