By Ivan Nechepurenko and Anton Troianovski

Moscow posted a death toll from its attack on Ukraine for the first time, and Russians who long avoided politics are now grappling with the fact that their country is fighting a deadly conflict. 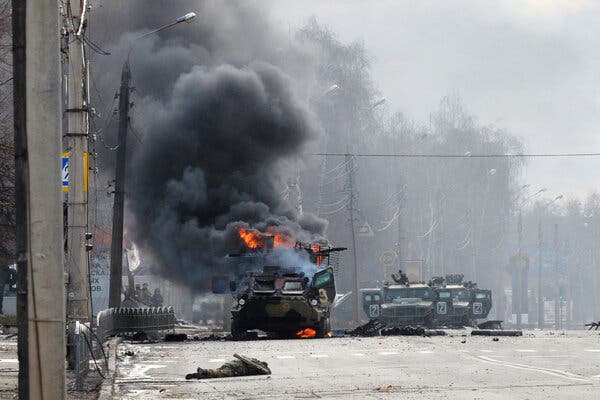 SOCHI, Russia — On Feb. 23, Razil Malikov, a tank driver in the Russian Army, called his family and said he would be home soon; his unit’s military drills in Crimea were just about wrapping up.

The next morning, Russia invaded Ukraine, and Mr. Malikov hasn’t been heard from since. On Monday, Ukraine published a video of a captured soldier in his unit, apologizing for taking part in the invasion.

“He had no idea they could send him to Ukraine,” Mr. Malikov’s brother, Rashid Allaberganov, said in a phone interview from the south-central Russian region of Bashkortostan. “Everyone is in a state of shock.”

The reality of war is dawning across Russia.

On Wednesday, the Russian Defense Ministry for the first time announced a death toll for Russian servicemen in the conflict. While casualty figures in wartime are notoriously unreliable — and Ukraine has put the total of Russian dead in the thousands — the 498 Moscow acknowledged in the seven days of fighting is the largest in any of its military operations since the war in Chechnya, which marked the beginning of President Vladimir V. Putin’s tenure in 1999.

Russians who long avoided engaging with politics are now realizing that their country is fighting a deadly conflict, even as the Kremlin gets ever more aggressive in trying to shape the narrative. Its slow-motion crackdown on freedoms has become a whirlwind of repression of late, as the last vestiges of a free press faced extinction.

This week, lawmakers proposed a 15-year prison sentence for people who post “fakes” about the war, and rumors are swirling about soon-to-be-closed borders or martial law. The Education Ministry scheduled a video lesson to be shown in schools nationwide on Thursday that described the war against Ukraine as a “liberation mission.”

And in Moscow, the regional office of the Committee of Soldiers’ Mothers of Russia has been fielding 2,000 calls a day since last Thursday.

“The parents’ first question is: What happened to my child?” said Aleksandr Latynin, a senior committee official. “Is he alive?”

Seizing on the worries of Russian families, Ukraine has pushed to publicize the fact that many young Russian soldiers were dying or being taken prisoner — a reality that the Russian military did not acknowledge until Sunday, the fourth day of the war. Ukrainian government agencies and volunteers have published videos of disoriented Russian prisoners of war saying they had no idea they were about to be part of an invasion until just before it began, and photographs and footage showed the bodies of Russian soldiers strewn on streets and fields.

The videos are reaching some Russians directly. Yevgeniya A. Ivanova, for instance, identified a friend of hers, Viktor A. Golubev, who appeared in one of the videos. In it, Mr. Golubev said he “feels guilty for his wrong actions” on Ukrainian soil and calls on President Vladimir V. Putin “to find a compromise to avoid war.”

To some Russians, the toll in human lives is reason enough to oppose the war, and OVD-Info, an activist group that tallies arrests, has counted at least 7,359 Russians detained during seven days of protests in scores of cities across the country.

“It’s the third decade of the 21st century, and we are watching news about people burning in tanks and bombed-out buildings,” Aleksei A. Navalny, the opposition leader, wrote in a social media post from prison on Wednesday, calling on Russians to continue to rally despite the withering police crackdown. “Let’s not ‘be against war.’ Let’s fight against war.” 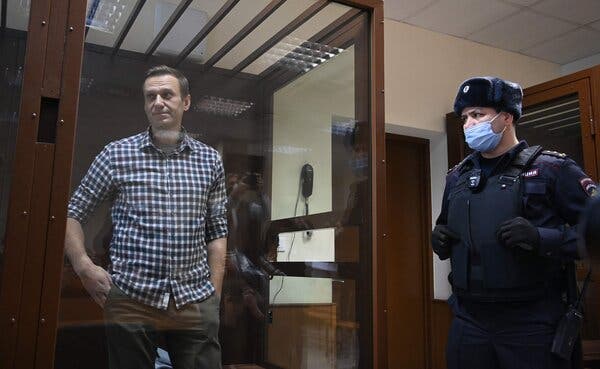 Members of the Russian elite also continued to speak out. Lyudmila Narusova, a member of Russia’s upper house of Parliament, told the independent Dozhd television channel on Sunday that dead Russian soldiers in Ukraine lay “unburied; wild, stray dogs gnawing on bodies that in some cases cannot be identified because they are burned.”

“I do not identify myself with those representatives of the state that speak out in favor of the war,” Ms. Narusova said. “I think they themselves do not know what they are doing. They are following orders without thinking.”

The Russian International Affairs Council, a government-funded think tank, published an article by a prominent expert describing the war as a strategic debacle. The expert, Ivan Timofeev, said Ukrainian society would now “see Russia as an enemy for several decades to come.” He added a veiled warning directed at government officials who were now cracking down on people speaking out against the war.

“History shows that those who look for ‘traitors’ sooner or later themselves become victims of ‘enthusiasts’ and ‘well-wishers,’” Mr. Timofeev, the council’s program director, wrote.

But the discontent showed no sign of affecting Mr. Putin’s campaign, as Russia’s assault on Ukraine widened, with heavy fighting reported for the port city of Mariupol on the Sea of Azov. The government signaled it would only intensify its crackdown against the war’s critics — including those who called it a “war” rather than, in the Kremlin’s anodyne term, a “special military operation.”

On the Ground: Ukraine Under Attack

“Individuals who carry out falsification must be punished in the most severe way,” said Vasily Piskaryov, a senior lawmaker in Mr. Putin’s party. “They are discrediting the absolutely rightful and understandable actions of our armed forces.”

His proposed punishment: 15 years in prison. The Parliament, which is controlled by the Kremlin, will take up the law on Friday.

Some feared that Mr. Putin could go even further, repressing dissent to an extent unseen in Russia since Soviet times. Tatiana Stanovaya, a scholar who has long studied Mr. Putin, wrote it was “more than logical” to expect that lawmakers this week would approve the imposition of martial law in order to block the open internet, ban all protests and restrict Russians from being able to leave the country.

Such speculation, fed by how quickly the Kremlin was moving to block access to individual news media outlets and arrest protesters, has led increasing numbers of Russians to flee the country.

A city is captured. Russian troops gained control of Kherson, the first Ukrainian city to be overcome during the war. The overtaking of Kherson is significant as it allows the Russians to control more of Ukraine’s southern coastline and to push west toward the city of Odessa.

Military aid. Several countries are funneling arms into Ukraine, while NATO is moving military equipment and troops into member states bordering Russia and Belarus, amid rising fears that Russia might try to reclaim its sphere of influence in Eastern Europe.

American airspace ban. President Biden announced that the U.S. will ban Russian aircraft from flying through American airspace. The ban follows similar moves by the E.U. and Canada to shut airspace to passenger flights from Russia and to planes used by Russian oligarchs.

Russian convoy. Satellite images show a Russian military convoy stretching 40 miles long on a roadway north of Kyiv, with a number of homes and buildings seen burning nearby. Experts fear the convoy could be used to encircle and cut off the capital or to launch a full-on assault.

Echo of Moscow, Russia’s flagship liberal-leaning radio station, was taken off the air on Tuesday for the first time since the Soviet coup attempt of 1991. Leading staff members of Dozhd, Russia’s only remaining independent television channel, left the country on Wednesday after access to its website was blocked.

“It’s clear that the personal security of some of us is under threat,” Tikhon Dzyadko, the channel’s editor in chief, wrote, explaining why he had decided to “temporarily” depart.

There was also evidence that, even though the war took many Russians by surprise, significant numbers had come to accept it as unavoidable or forced upon Russia by an aggressive NATO. The economic crisis touched off by the West’s harsh sanctions reinforced that narrative for some. On Wednesday, the ruble plumbed new lows as more companies like Siemens and Oracle announced they would reduce their operations in Russia and as the central bank ordered the Moscow stock exchange to remain shut on Thursday for the fourth straight day.

At a Moscow shopping mall on Wednesday, a young couple lining up for cash at an A.T.M. said they opposed the war. And yet they said that the way the world was punishing them for it was not fair, either, considering that the United States had fought its own wars in recent decades without coming under harsh international sanctions.

“Just as you can criticize the government, you can criticize Western countries,” said Maksim Filatov, 25, who manages a hookah-bar business. “When there were analogous situations in other countries involving the United States, there were no such attacks, and they didn’t drive the country into crisis.”

And the Committee of Soldiers’ Mothers, despite being a firsthand witness to the tragedy wrought by the war, had decided to support it, according to Mr. Latynin, the senior official. He echoed the words of Mr. Putin, who last week described his “special military operation” as one of “self-defense.”

“We understand that no armed conflict comes without victims,” Mr. Latynin said. “But this was a necessary step, because it was impossible to go on like this.”

A War the Kremlin Tried, to Disguise Becomes a Hard Reality for Russians, USA