The acting federal Education Minister Stuart Robert surely assumed he was chatting confidentially among friends last week when he told a private schools conference the sustained decline in the academic results of Australian 15-year-olds relative to their international peers is because of “dud teachers” in government schools.

The “duds” were defined as the “bottom 10 per cent of teachers” who graduate from initial teaching courses notwithstanding they “can’t read and write”. But private schools are dud-free zones, the acting minister purred to his audience, because principals have the power to hire and fire and are naturally intolerant of dud educators, and if the government could only “bottle” the success of these schools, the nation’s youth would rise beyond mediocrity. 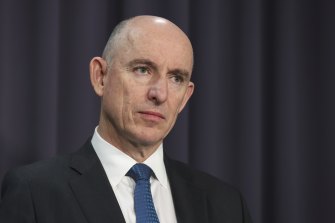 My assumption that Robert assumed his remarks wouldn’t be reported could be way off the mark. He might talk like this every day, unaware or unconcerned his comments amount to cosy sledging of the majority of Australian families in public schools. Because to my ears Robert is not just criticising complacent education bureaucracies for “protecting” bad teachers; he’s also slagging off parents who either don’t realise duds are teaching their kids or if they do are too busy sinking their welfare payments into a slab to make a fuss.

Robert was clumsily on message for the Coalition, though. Lifting teaching standards through funding levers is central to the government’s schools policy.

Let’s be grown up about this. No disrespect to the many dedicated and talented educators out there, but it’s beyond dispute that as the profession loses status, the bar for entry to teaching courses has fallen so low as to make a proliferation of “duds” inevitable.

As the Grattan Institute’s Jordana Hunter points out, demand from high achievers for teaching fell by a third over the past decade – more than for any other undergraduate field of study. The top pay bracket is perceived as too low as is the intellectual challenge, and the indignities, such as yard duty, too many.

Robert’s remarks were outrageous for the assertion the duds are confined to public schools. He takes the private schools’ alleged “success” as proof their teachers are up to the task – an analysis that ignores the raw material teachers work with.

Here’s a key “learning” of the past 20 years: Australia’s schools are among the developed world’s most socio-economically segregated. The better-off students are clustered in private schools; the less well-off disproportionately in public schools. And because the former enjoy a head-start from the moment of conception – some literally read to while in utero – they’re much easier to teach than the latter.

Amid the elite schools’ ritual crowing about their sterling ATAR scores, former school principal Adam Voigt wrote last year in the Herald Sun: “To be blunt, you could put a cabbage at the front of a room full of these students and they’d still end up in law or medicine at Melbourne University.”

A tad ungenerous, but he painfully nails it: a cohort of rich students is likely to do well. Good for them. Not so good for a nation that can ill-afford an underclass.

Anthony Albanese frequently reminds us he was raised by a single mother in a public housing estate, and was not only the first in his family to go to university, but the first to finish school. It is a rousing story that endows the Labor leader with moral authority. For now, however, the ALP’s schools policy is a motherhood statement: “fix the fundamentals of our schools” so that “no one is held back and no one is left behind”.

As motherhood statements go, it gets top marks, aspiring to equity (“no one is left behind”) and also to excellence (“no one is held back”). There was a time left-of-centre education policies were typecast as giving every kid a prize for advanced basket weaving. The newer species of social democrat has pushed accountability in education to stunning electoral success. In the 1997 UK election, New Labour leader Tony Blair famously described his top three priorities as “education, education, education”, and vowed zero tolerance on failure.

Here, the Rudd-Gillard years trumpeted an “education revolution” that brought NAPLAN tests and greater transparency about schools’ performance. Before it stormed to victory on the weekend, South Australia’s Labor Party promised to give principals more powers to sack underperforming – yes, “dud” – teachers.

At this point I hear a chorus of experts warning the Blair-style revolutions demoralised teachers, substituted real learning with “teaching to the test”, and stigmatised schools by treating crude snapshots of students’ progress as if they’re revelatory.

“The pollies latch on to the term ‘standards’ as if the meaning’s a given,” says Stephen Spain, who recently completed a PhD on the Australian curriculum at Murdoch University. We need a “holistic” model of education that tailors curriculum to individual needs and tracks student growth over time, argues Spain and others.

All I know is parents want to know politicians are invested in excellence, however it’s measured.

One last point on Labor’s “no-child-should-be-left behind” equity theme. Remember the “sector blind and needs-based” Gonski reforms on schools funding? The notion that schools with tuck shop baristas should get less of a taxpayer top-up and schools with leaking toilets should get more?

Poor kids are competing against rich kids on a playing field that’s even more uneven than it was 10 years ago. Got that? It will be on the exam in May.