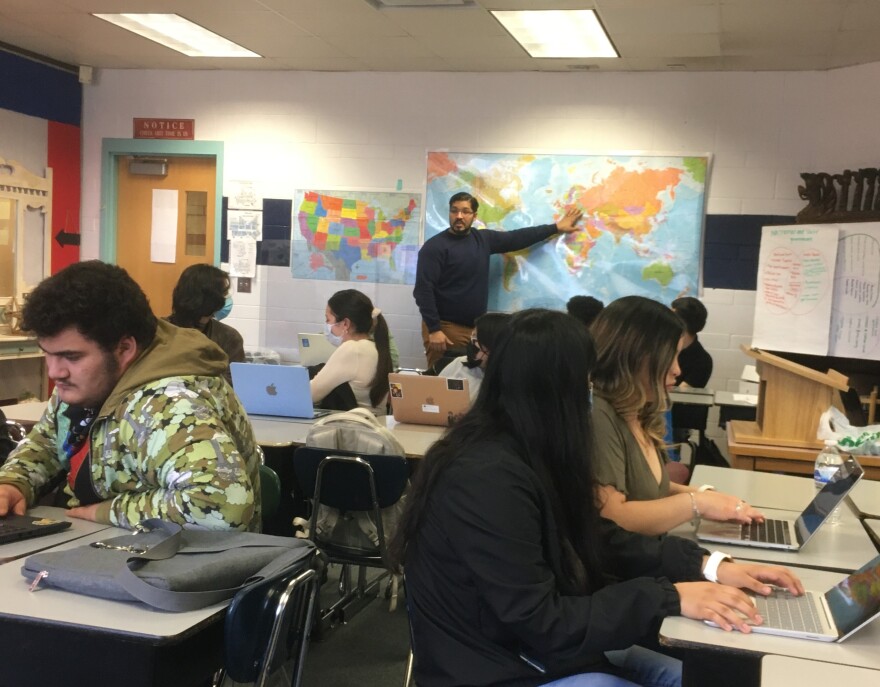 “Where’s Ukraine?” asks teacher Manuel BenZvi of his government class in Dallas ISD’s Judge Barefoot Sanders Law Magnet school. Today’s lesson – the Russia-Ukraine war. BenZvi’s three big points: History repeats itself. We are all interconnected. And, in a world of propaganda, we must learn to filter lies from truth.

More than six weeks into the deadly conflict between Ukraine and the invading Russia, the world is watching. So how are teachers working this into their lesson plans and what are students taking away?

On an April day at Dallas ISD’s Judge Barefoot Sanders Law Magnet school, Manuel BenZvi’s government class began somewhat deceptively. BenZvi invited anyone to share a bit of their own culture, because, as he’d told them previously, that day had been dubbed ‘culture’ day.

BenZvi broke the ice and shared some of his own. He put on a brightly decorated yarmulka and tallis, a Hebrew prayer shawl. Benzvi is Jewish.

After BenZvi finished sharing, a student showed, and played, one of two ocarinas he got on a trip to Mexico.

Once he sat down, the class formally began.

“Look up the following person,” said BenZvi, as projections on the large white classroom screen showed an actress many students probably recognized. Her name was also projected, so they looked up Mila Kunis online.

“I want you to search for where she was born and what is her background,” BenZvi said.

Kunis, they learned, is not only from Ukraine, she’s also Jewish. That discovery fed part of that day’s lesson, as BenZvi played a video of Vladimir Putin. The students listened to Putin’s voice and those of an English-speaking interpreter, explain why Russia is invading Ukraine.

“The fact that we’re fighting with neo-Nazis,” intoned the interpreter’s voice on behalf of Putin, “is demonstrated by the actual character of the fighter.”

BenZvi paused the video, and asked his students “Who is Vladimir Putin?” Several responded, and one used finger quotes around the word “president.” BenZvi asked why.

Because, the student responded, in elections, he has no real opponents. “Well,” said BenZvi, “that’s not entirely true. Whoever opposes him, what happens to them?”

Students said “they die, or go to jail.”

Published reports going back more than a decade show dozens of Putin critics, including political actors, have died.

BenZvi then asked students to also look up Ukraine’s President, Volodymyr Zelenski. “He’s Jewish too,” said BenZvi, and so are many Ukrainians. But he explained antisemitism exists in Ukraine as well, and said that’s why Kunis’ family left when Mila was little.

“I feel that is very ironic,” said Mendez. “Because Ukraine, they have a Jewish president, but the Nazis were very anti-Jew.”

With that point made, BenZvi’s class critically assessed another of Putin’s points. That Ukrainians are Russians, the same people, and Putin is out to reunite them.

“He (Putin) would take the cultures and customs of other people, within Russia and the USSR’s territories,” said Oscar, “and make them all unified, into one people.”

Mizarey countered, “But going as far as to, like, bombing Ukraine to get that point across? It just contradicts what he was saying. In the sense that if y’all are all one people, you wouldn’t do that.”

BenZvi wants this class to grasp that history repeats itself.

“We’re seeing, you know, the possibility of a second Cold War. I have many students asking me about a nuclear war and having that fear. It echoes, you know, what I’ve heard from my grandparents in the past,” he said.

There are even more big lessons BenZvi hopes these sophomores, juniors and seniors will take away.

“That we are all interconnected. And, number three, with all the propaganda, how people are easily convinced of things that are not necessarily true.”

Students in this government class, including Todd Stansberry, offered some of their own advice to avoid getting duped by online posts.

Stansberry prefers viewing many social media posts about the same events. He’s already wary of bias. However, he’s learned to look for commonalities among many, varied posts. Once he finds them, he can filter out the biases. “That’s the best way to believe what is being told to me, he said.

During this class about one of the biggest news events in the world, not a single student asked why they should care, given that the fighting was so far away.

Katelayn Vault, 17, said she was directly feeling the impact of this distant conflict.

How a Dallas high school class, is learning about Russia’s invasion of Ukraine, USA