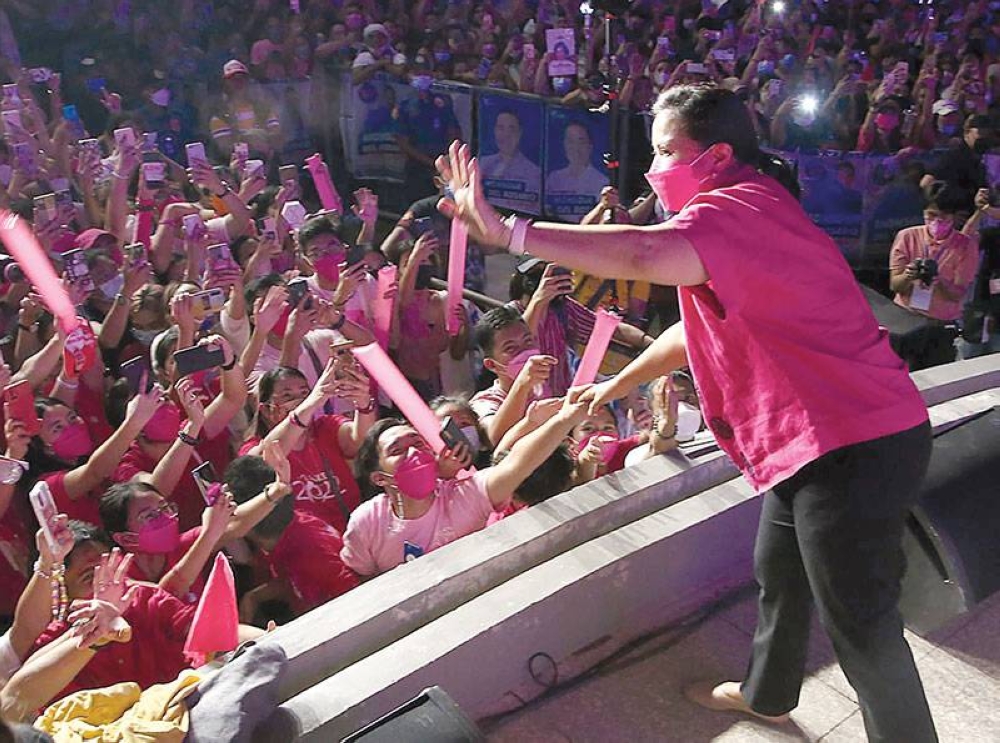 CANDIDATE for president Maria Leonor “Leni” Robredo is keen on declaring an “education crisis” if elected in the May 9, 2022 elections to immediately address concerns of the sector.

She said this during the first part of the Coordinating Council of Private Educational Associations of the Philippines’ (Cocopea) “The Education President Interview Series” on Friday at the University of Pangasinan.

“One of the first things that I will do if elected president is to declare an education crisis. Ang aking palagay kailangan natin itong gawin para ‘all hands on deck’ tayo. Malaki na ang problema natin (In my opinion, we have to do this so that we can have an ‘all hands on deck’ approach. We already have big problems) and the pandemic has only exacerbated all our education problems,” the vice president said.

Robredo shared that during the start of the pandemic in 2020, she and her team reached out to the Department of Education (DepEd) to propose that schools in areas low-risk for Covid-19 transmission be kept open to prevent learning loss, and to open learning hubs in areas high-risk for transmission where students can visit for assistance in learning or to have access to tutors, gadgets and internet connectivity.

She, however, said the proposal to the DepEd did not push through, but the Office of the Vice President pursued building learning hubs accessible to their teams, now with more than 150 hubs nationwide through partnerships with education nongovernment organizations (NGOs).

Robredo also said she aims to strengthen the partnership between the public and private education sectors to help address the problem of access to education and the quality of education.

Robredo cited the need to expand the coverage of the voucher program that allows learners to study in private schools with a tuition subsidy, and to also provide additional support to scholars and students in higher education since free tuition does not cover other needs such as housing, food and transportation allowance.

She highlighted the importance of valuing the teachers in both public and private schools by reviewing the compensation plan for teachers so that private school teachers’ salaries can keep up with the public sector’s, and supporting the continuing education of teachers for reskilling and upskilling so they can give quality education to learners.

Robredo pushed for lightening teachers’ burden in administrative work so that they can focus on instruction and suggested hiring more teaching assistants to complement the workload of classroom teachers.

She urged collaboration between the academe and the education sector to provide students with the necessary skills to enter the workforce after they received their education.

Robredo said there was a mismatch between the sector’s needs and the skills being taught and learned by students, which could in turn result in under- or unemployment.

She also suggested the establishment of Regional Excellence Centers, in partnership with the academe, to focus on research and development to address the needs of the community, as well as enhance opportunities for them to thrive.

Robredo said she will also strengthen programs to provide assistance on mental health for teachers and students.

The Cocopea invited other candidates for president to take part in The Education President Interview Series so that they could share with education stakeholders and the public their plans to address challenges in the sector, especially those greatly affected by the Covid-19 pandemic.

“We continue to send our invitation to other candidates who have not yet manifested their intention to join the interview series upang marinig po kayo ng ating mga estudyante, magulang, guro, at lahat ng stakeholders sa edukasyon ng Pilipinas (so that our students, parents, teachers and all stakeholders in Philippine education can listen to you),” Cocopea President Dr. Anthony Jose Tamayo said.

The next part of the interview series will feature candidate for president and labor leader Leodegario “Ka Leody” de Guzman on April 25, 2022.

In a media interview at the University of Pangasinan during the interviews series, Robredo held the DepEd responsible for letting some information into a module that could poison people’s minds, particularly senior high school students taking up philosophy.

The module takes issue with her and ABS-CBN on their criticism of the government’s drug war and pandemic response on pages 9 and 30.

“The DepEd should not permit anything that can poison people’s minds, not just because of me as the subject. It is not something that the department should allow,” Robredo said.

A statement released by ACT Teachers party-list sought immediate evaluation of the module, which was published in its first edition in 2020.

It said the module is politicking in an inappropriate manner and contains grammar and punctuation errors, as well as spelling mistakes.

If he is elected president, independent candidate Sen. Panfilo “Ping” Lacson said he would revive the country’s micro, small and medium enterprises (MSMEs) to alleviate unemployment.

Lacson noted that the MSMEs are still recovering from lockdowns triggered by the pandemic, even as they now face new challenges such as rising costs of fuel.

On Thursday, the Philippine Statistics Authority said the unemployment rate in February was at 6.4 percent, meaning some 3.13 million were unemployed in February 2022.

It, however, seems to be all over but the shouting for rivals of candidate for president and former senator Ferdinand “Bongbong” Marcos Jr. with only 30 days to go before the May 9 elections,

To possibly stop him from “winning,” House Deputy Speaker Jose “Lito” Atienza, a candidate for vice president, also on Friday said he still hopes for the Lacson “miracle” to happen to spoil Marcos’ “victory.”

Speaking at the Pandesal Forum, a regular media event held at the Kamuning Bakery in Quezon City and hosted by Wilson Flores, Atienza said this miracle was the senator’s move giving way to Promdi standard-bearer Sen. Emmanuel “Manny” Pacquiao by turning independent.

He, however, clarified that this is his personal opinion.

On March 31, Lacson slammed Atienza for asking him to withdraw from the May 2022 race for president.

“What he did is uncalled for, kabastusan (bad manners), to say the least. He should go back to school and study Good Manners and Right Conduct (GMRC), which I co-authored,” he said.

“For the nth time, I will finish this race and I am not backing out. I reject the call of Rep. Lito Atienza for me to withdraw from the presidential race,” Lacson added in his Viber account.

During the Pandesal Forum, Atienza reiterated his public apology to Lacson that he did not intend to insult the senator when he asked Sotto to be Pacquiao’s running mate.

In fact, he said he respects Lacson since he was then-mayor of Manila and Lacson was then-chief of the Philippine National Police.

Atienza added that he had proposed that Sotto become the running mate of Pacquiao to dramatically change the dynamics of the elections, to make the Pacquiao-Sotto tandem a formidable challenger to survey frontrunner Marcos and his running mate Sara Duterte Carpio.