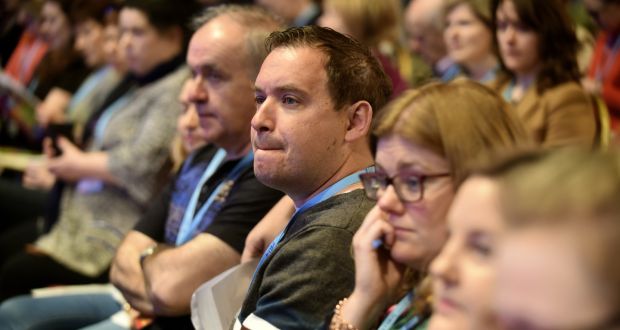 Delegates at a recent Irish National Teachers’ Organisation’s annual congress in Killarney: Cost-of-living issues are likely to trigger demands that the Government provides inflation-matching pay rises before the end of the year. Photograph: Moya Nolan

With inflation rampant, the cost of living and pay look set to dominate teachers’ conferences. Unions say it is getting harder for new entrants to make ends meet – especially in Dublin – and is leading many to abandon the profession.

The Irish National Teachers’ Organisation (INTO) is to get the ball rolling on Monday when its president, Joe McKeown, will demand that the Government provides inflation-matching pay increases before the end of the year to compensate members for the rising cost of living.

Mr McKeown will tell delegates that inflation-matching pay increases are needed to “stabilise” the current pay deal and preserve industrial peace. Among secondary teachers’ unions, much of the focus will be on ending the decade-old. two-tier pay gap.

However, there are signs of a breakthrough. Tens of thousands of secondary teachers hired over the past decade look set to receive a €1,300-a-year pay increase following an agreement between unions to restore an allowance cut during the recession. This is under a sectoral bargaining aspect of the current pay deal, which allows flexibility in how up to €22 million can be spent to tackle local pay claims.

The “HDip” allowance – now known as the Postgraduate Masters in Education allowance – was abolished in 2012 as a cost-saving measure and has formed a key part of the pay gap between “new entrants” and longer-serving colleagues.

The Teachers’ Union of Ireland (TUI) and the Association of Secondary Teachers Ireland (ASTI) have agreed to restoration of the payment.

This is understood to be worth €15-16 million. Agreement has yet to be reached on how the remaining €5 million will be spent.

Under planned reform of the Leaving Cert, teachers could be responsible for marking up to 40 per cent of their students’ work. However, both secondary teachers’ unions are vehemently opposed to any such move.

While the TUI has welcomed many elements of the recent announcement in relation to senior cycle reform, it says State certification and external assessment are key and must be retained.

“Fairness for all students and the significant public trust that the current system enjoys cannot be put at risk,” TUI general secretary Michael Gillespie said.

Similarly, the ASTI has said marking students for the purposes of a State exam is something the union has opposed for decades. Its general secretary, Kieran Christie, said the system should be perceived as being “entirely above reproach” and has indicated that its members may stand in the way of any plans for teacher assessment.

Minister for Education Norma Foley has insisted that teacher assessment for major exams is best practice in many other jurisdictions and that the State Examinations Commission will play a key role in “moderating” any teacher-assessed work.

Teachers’ unions have warned that the education system could come under significant strain unless more teachers and supports are made available to meet the needs of Ukrainian children.

No one knows for sure how many will need school places. However, Ms Foley has signalled that there is “significant capacity”, with about 40,000 spare places across primary and second level.

The INTO and TUI annual conferences are due to hear motions on this issue calling for significant additional resources to be provided to schools. This include language teachers, better access to translation services, and more resources for psychological supports and counselling.

Crowded classrooms, teacher shortages and poorly ventilated schools were tolerated in the years before the pandemic, but now there is a new drive to ensure the system is appropriately funded.

All three teachers’ conferences will hear calls to “appropriately” fund education and to retain any Covid-era gains such as additional teachers.

Unions argue that the latest OECD indicators show that of the 36 countries listed, none spend a lower proportion of national wealth on education than Ireland. The Government argues that our gross domestic product figures are distorted by the presence of multinational firms and a better measure is the proportion of public funding which goes on education. Using this measure, Ireland performs much better.

Across all education sectors, unions say there has been a sharp increase in workload caused by bureaucratic and administrative demands, which deflect members from teaching and learning. There are various motions calling for the restoration of middle-management posts and an easing of pressure on principals through greater supports and more release days.