Children arriving at primary schools in Britain are unable to say their own names, with many not trained and still eating baby foods, a report is set to reveal.

A year-long inquiry into the state of the UK education system will reveal its results on Wednesday after finding out from dozens of headteachers, experts and leaders that early-years education is in a shocking state.

One headteacher from Nottinghamshire told of how little time was spent on the essential lessons in literacy or numeracy in her reception classes as teachers had to direct their focus on basic care – with many not toilet trained or able to say their own names.

She said that many of the four and five-year-olds in her school had only drunk from baby bottles, and when thirsty, would say the term ‘bot-bot’ rather than knowing how to communicate that they wanted a drink. Others are still on baby foods.

Her school has even had to employ care workers just to help change nappies of her pupils. She added that one child was brought into school in a shopping trolley as the parent found it to be the ‘cheapest mode of transport’. 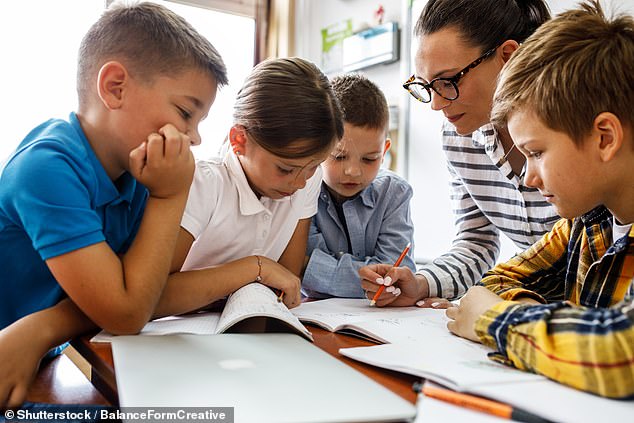 Children arriving at primary schools in Britain are unable to say their own names, with many not trained and still eating baby foods, The Times Education Commission is set to reveal this week (file photo)

Ahead of the final report for The Times Education Commission, she told the newspaper that 50 per cent of the children in reception and nursery are not toilet trained.

The Nottinghamshire head continued: ‘We are parenting in so many different ways. I need to do an assembly on eating with a knife and fork because the children will eat a full Sunday dinner with their hands.

The astounding results will launch an initiative that will encourage parents to talk and play with their children so their first interactions in the education system can focus more on the curriculum rather than basic life skills.

The Times spoke to another headteacher in Cumbria who said that children were coming to the school being pushed in buggies until they were around six or seven, and with many still sucking on dummies.

Nearly a third of five-year-olds in England are ‘not reaching a good level of development’ and deprived pupils are around five months academically behind their richer classmates by the time they begin school.

And by the age of 16, this gap widens to 18 months, a YouGov poll by early years charity Kindred Squared found.

In 2020, 46 per cent of pupils starting in reception were not ready for school had risen from 35 per cent the previous year. The pandemic is said to have been a catalyst to the issue.

Another teacher, from West Yorkshire, revealed that they have around half of their children who are not ‘school ready’, but this year it is at a staggering 80 to 90 per cent.

Felicity Gillespie, director at Kindred Squared, said: ‘One child I heard about needed intensive physiotherapy because they didn’t have the strength in their legs to walk the amount they needed to at school.

‘Some children spend so much time in front of the TV they’re physically not developing their muscle tone.

‘Some will blame parents but we all want the best for our children and teachers say what isn’t being made clear enough to parents is what being developmentally ready for school actually means.’

The final report of the commission says that the government has to ‘overcome squeamishness’ about getting directly involved in family life, suggesting that there should be more in the way of home visits and drop-in centres.

Mis tuits
Some children arriving in primary education are unable to say their own NAMES, teachers report is set to reveal – with many not toilet trained, still eating baby food and one pupil even brought to school in a shopping trolley – Sarraute Educación María Magdalena

Sarraute Educación Some children arriving in primary education are unable to say their own NAMES, teachers report is set to reveal – with many not toilet trained, still eating baby food and one pupil even brought to school in a shopping trolley
A %d blogueros les gusta esto: