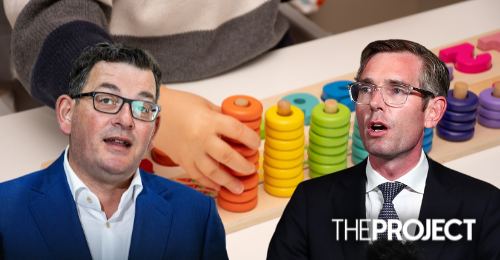 Free kinder for four-year-olds will be expanded in Victoria & New South Wales under an early education overhaul.

Children in Victoria will have access to 30 hours across five days of play-based learning each week before the first year of school under a significant change in tandem with NSW.

The extra hours will see four-year-old kinder transition to pre-prep.

The program will be free but is not mandatory and will be delivered through kinder and day care.

The new program will focus on a child’s “growing and learning” to give them “the skills they need for school” and life.

Three-year-old kinder will be free beginning next year and is already rolling out across the state, with families accessing 15-hours of learning each week.

In a joint statement on Thursday, Premier Daniel Andrews and NSW Premier Dominic Perrottet said the change would benefit “hundreds and thousands” of working families across both states.

“These massive reforms are about setting our kids up for the future and investing in women, who for far too long have had to do far too much,” Mr Andrews said.

“These are big changes, but they just make sense, giving our kids the very best start in life and delivering early education and care that actually works for families.”

Early leaning organisation Thrive by Five said the changes would be life-changing for many families.

“The race to the top on significant early learning reform will be life-changing for children, women and families across Victoria and NSW,” Thrive by Five director Jay Weatherill said.

“It’s not just an incredible investment in children, this is an investment in better choices for women and families and will drive workforce participation and the economy.

“These early learning announcements show great leadership and open a door of opportunity for all state and Federal governments to work together for universally accessible, high-quality and affordable early childhood education and care.”