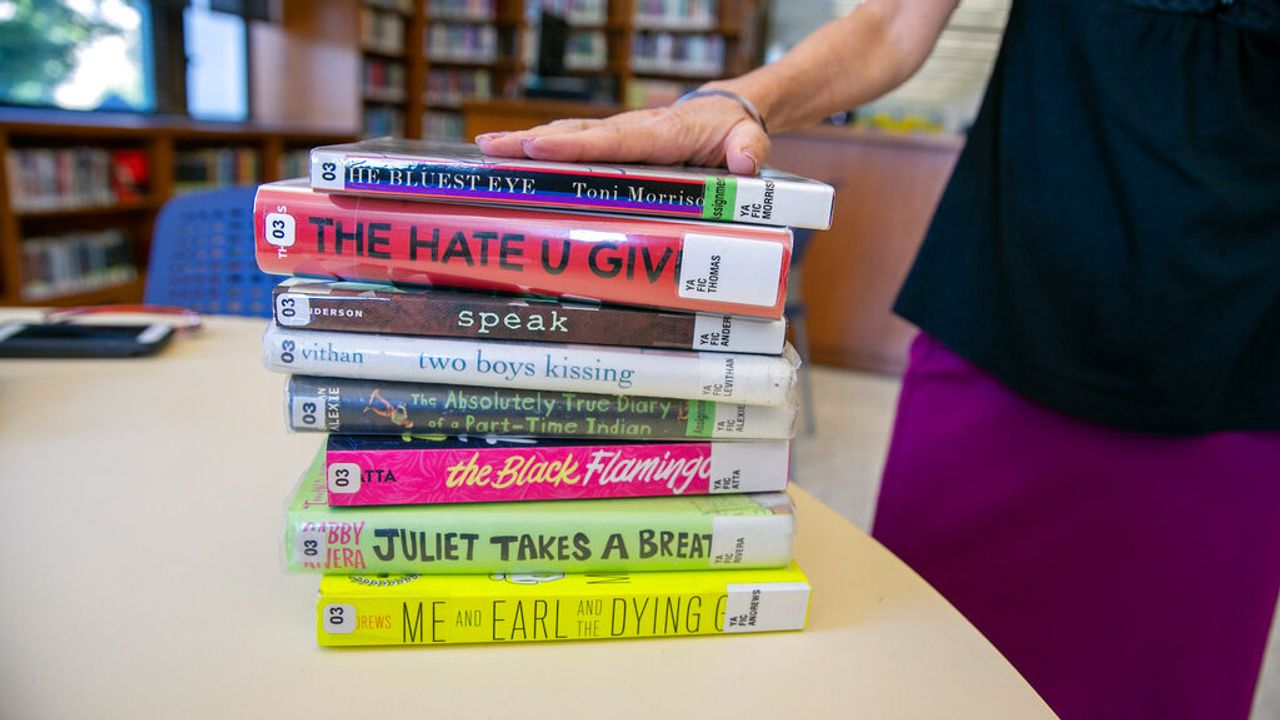 Banned books are visible at the Central Library, a branch of the Brooklyn Public Library system, in New York City on Thursday, July 7, 2022. [AP Photo/Ted Shaffrey]

A Norman, Oklahoma teacher, Summer Boismier, was forced to resign in late August for sharing a QR code linking to the Brooklyn Public Library’s UnBanned, which provides access to banned books.

According to the school district, a parent complained about Boismier’s potential violation of HB 1775, a reactionary state law passed last year, before the second day of class. The bill prohibits Oklahoma schools from teaching various concepts about race and gender. The witch-hunter was afforded privacy by the district supposedly to avoid retaliation against their children.

The district contacted Boismier after the first day of class, held Friday August 19, and subsequently informed her she was on administrative leave. Boismier told the Daily Beast she believed the complaint was from a parent who wanted her fired.

This is a blatant attack meant to normalize the witch-hunting of teachers in preparation for further attacks on public education.

A week before classes, Boismier, who has been teaching for 10 years, tweeted photos of her classroom showing book cases covered by red paper, labeled “Books the state doesn’t want you to read.” Boismier and other teachers were instructed that they had to sign a sheet indicating they would review all books in the classroom for compliance with HB 1775 prior to the first day of school.

The teacher explained in a statement to the media:

“I have made the decision to resign from my position at Norman High School. I will say that the district did offer me back my job, allowing me back in the classroom as of tomorrow morning. However, there were some fundamental ideological differences between myself and district representatives that I just couldn’t get past. HB 1775 has created an impossible working environment for teachers and a devastating learning environment for students. For the second year in a row, students at Norman High will be without a certified English teacher for a substantial amount of time. The fault for that lies with Governor Stitt and Republican state leadership.”

The far-right applauded the victimization, with Education Secretary Ryan Walters telling teachers on the far-right Daily Caller to “find another job.”

HB 1775 is already being used to destroy public education by shuttering schools. According to the Tulsa World, the State Board of Education accredited Tulsa Public Schools (TPS) and Mustang Public Schools district for 2022-23, but with a warning and a deficiency.

The downgrade in accreditation was made on the flimsiest of grounds. The World reported that Brad Clark, an attorney for the Oklahoma State Department of Education, claimed “that while the slides from the 18-minute professional development session did not show a violation of the law, audio from the event indicated that the training broke the spirit of HB 1775, if not the letter.” Mustang was downgraded on the basis of a single incident at a middle school classroom in January. Just 30 minutes was allowed for TPS to make its case for reversing the downgrade, while a mere seven was afforded to Mustang.

That is, the “warning” brings both districts closer to losing accreditation, which would effectively destroy Tulsa’s public education system, the largest in the state, as well as Mustang’s, by removing federal and state funding. Recently the state denied challenges to the accreditation status, indicating the districts are on track to lose it.

The threats against Boismier were made on similarly flimsy grounds as the downgrading of the districts, given that the allegations arose on day one of school before any real instructional time had taken place.

The removal of teachers for their ideas is not new, as the ruling elite attempts to clamp down on democratic rights and rebellious thinking among young people in general.

This process has been bound up with and made possible by the degeneration of the unions. As a teacher wrote on the WSWS in 2010:

In the late 1960s and early 70s, teachers pushed back intrusive rules and arbitrary victimization, through job security protections gained in the course of militant trade union battles. Since the 1980s, however, the teachers unions have worked hand-in-hand with the two big business parties to undermine gains made by teachers. This has culminated in the open collaboration by the American Federation of Teachers and the National Education Association with the Obama administration in the greatest assault on teachers and public education in history.

The forcing out of Boismier, ostensibly for the transgression of posting a single QR code, marks an escalation in this attack on teachers’ democratic rights.

This has also taken the form of victimizations of teachers opposed to the homicidal COVID-19 policies. The latter are designed to let the pandemic rip through the population so as to facilitate the back-to-work drive forced upon parents.

The solution to these attacks will not be found through the teachers unions, which have themselves cooperated for decades in the destruction of public education, nor the Democrats, who have participated in the vicious attacks on public education alongside the Republicans.

Teachers seeking to defend public education and their jobs need to form rank-and-file committees, independent of the unions, to fight for their interests and form the broadest connections with their class brothers and sisters in the US and in the international working class.