As part of Creative Inquiry’s mission to affect positive change, students and faculty work together on myriad issues, including air pollution, waste and ethical research.

When Khanjan Mehta, vice provost of Creative Inquiry at Lehigh, met with faculty from universities in Kazakhstan three years ago to talk about how their students might collaborate in tackling real world problems, he knew what he didn’t want the venture to be.

It wouldn’t be American students and professors swooping into a developing country and telling their counterparts what to do. Rather, it would be faculty and students from Lehigh and Kazakhstan learning from each other and bringing their own strengths and perspectives to tackle some daunting challenges in the former Soviet republic.

“I traveled there for a week and I was really blown away by the quality of the students, the infrastructure, the aspiration,” Mehta says. “So we decided to explore some pathways and ways in which we could expand our work with the Global Social Impact Fellowship which had started just that year. We won a grant from the American Councils for International Education, which was all we needed to get going and explore further.”

Then the Covid pandemic hit in early 2020 and the students and faculty had to collaborate on the projects in remote meetings and online exchanges.

In May Lehigh students and faculty finally got to meet their Kazakh counterparts in person. The Lehigh contingent spent two weeks in Kazakhstan in meetings and site visits for projects on developing sustainable behaviors and air quality in the capital of Almaty. Members of the Lehigh group also met with Kazakh partners who had requested help in creating ethical guidelines for research as the Central Asian nation strives to transition to a knowledge-based economy.

Such aims are in keeping with the mission of Lehigh’s Office of Creative Inquiry, which was launched in January 2017 to help students and faculty pursue independent inquiry, take intellectual risks and collaborate on effecting positive, sustainable change. Mehta, who is also director of the Mountaintop Initiative at Lehigh, says the Kazakhstan collaboration is an opportunity for students to engage with a part of the world they know little about and to make a difference.

“This is not my grandmother’s service project,” he says. “They’re not just learning about the culture, they’re directly working with people on really, really important global problems. Air quality is not a Kazakh issue, it’s not an American issue, it’s a global issue.”

All the Lehigh students working on the projects take a one-credit workshop course co-taught by Mehta and Bill Whitney, administrative director of the Office of Creative Inquiry.

A Game App to Teach Recycling

Trevor Lachman ’25 is part of the project working with students at Almaty Management University, known as AlmaU, to make measurable progress on reducing waste.  The team is creating a game app that teaches Kazakh schoolchildren the value of recycling and conservation. The project is known as “Save Tuba,” with Tuba being the group’s pet name for a Saiga antelope, which is native to the country and critically endangered.

“Right now in Kazakhstan, the recycling rate is incredibly low,” explains Lachman, a computer science major. “Behaviors start in children, so this is why we have focused on the behaviors in Almaty’s youth.”

Asked about schoolchildren’s access to the game, Lachman says about 81 percent of the population in Almaty has access to the internet and 64 percent have smartphones.

Nada Stojanovic ‘25, a computer engineering major at Lehigh, says last year’s Save Tuba team conducted focus groups with Kazakh teachers and students and the project received high marks from both.

Samir Hassan ’25, who is in the Computer Science and Business (CSB) program, uses a hypothetical student named “Sergey” to explain how school children can use the app to earn points and prizes after hitting milestones that teach habits of energy efficiency and pollution prevention.

Focusing on Air Quality in Almaty

Two other groups of Lehigh and Kazakh students are working on tackling the problems of air quality in Almaty. One is focusing on how to gauge the effects of air pollution on maternal health and adverse birth outcomes. The other is working on an app that will provide individualized plans for citizens who want to reduce their exposure to smog when it is at its most dangerous levels. Almaty has high levels of air pollution in part due to coal-burning power plants, traffic, and its location in a basin surrounded by mountains, according to Dinissa Duvanova, associate professor of international relations at Lehigh.

“It’s about as high as it gets in the world, similar to Beijing,” she says.

A native of Kazakhstan, Duvanova has been key to facilitating the partnerships and is Lehigh’s faculty mentor for the Almaty Air Quality Study team, which is working on the air quality app.

Lehigh students are learning about the complexities of encouraging other countries to clean up their environments without denying the inhabitants the ability to make a living and heat their homes.

“Calling for ceasing economic activity that produces negative health effects is not feasible and my students realize this,” Duvanova says. “But we cannot just sit and wait and watch people ruin their health over this.”

Niko Jones ’24, who is studying economics and political science, says the app the students are creating would let Almaty residents know when the city’s air quality is at its worst so they can make efforts to wear masks or stay indoors or take other measures. There are currently other apps that report on air quality but none that personalize the information for people with various conditions.

“We want to go a step further and learn from apps like Noom and Weight Watchers and Propeller, which have seen massive success over recent years in implementing these personalized recommendations to really improve users’ quality of life and in our case reduce their exposure to air pollution,” Jones says.

“These are things people can do right now before the transition to renewable energy happens,” says Duvanova, adding that the collaboration with students and faculty at AlmaU is vital to getting work done on the ground.

“They can do certain things that we cannot do from the U.S.,” she says. “They can talk to people, they can identify the stakeholders.”

Kate Lyden ‘24, an IDEAS major, says the group will survey app users to learn whether it is working effectively: “Are they wearing masks outside on certain days based on how bad the air quality is? Are there fewer hospitalizations? Are there fewer deaths?”

The project has been transformative for the Lehigh students, Duvanova says.

“You cannot imagine how excited the students were when they first met their student counterparts online in a zoom meeting,” she says. The projects have “changed the way they think about their place in society, in this country, in this world.”

Air quality is the focus of another group that launched a project to use Geospatial Information System (GIS) to document clusters of adverse birth outcomes with high levels of air pollution in parts of Kazakhstan. Pre-natal and post-natal exposure to air pollution and its long-term consequences for children has been a focus of the group’s mentor, epidemiologist Hyunok Choi, who joined Lehigh’s College of Health in 2020 and has conducted similar research in other former Soviet countries. 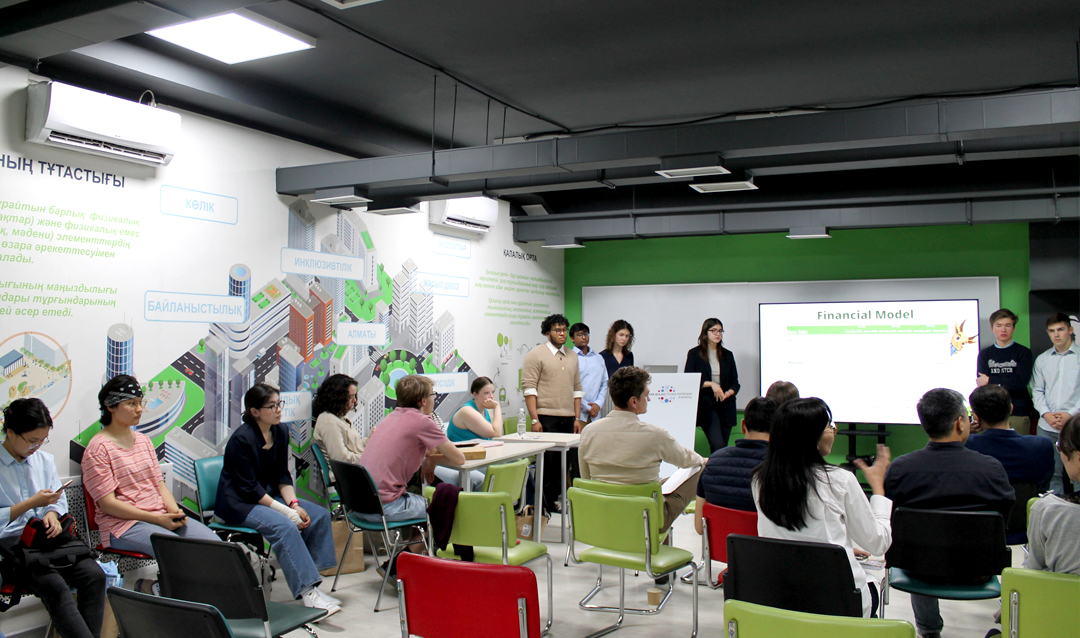 Members of Lehigh’s Save Tuba project team present their progress to a group of students and faculty from Almaty Management University during field work in May 2022.

For the new project “Energy diversification, pollution, and birth outcomes in Kazakhstan,” Choi and her team of Lehigh and Kazakh students will collect the data needed to show the correlation between air pollution and multiple childhood diseases and recommend measures to protect the Kazakh population.

The pollution study is collaborating with researchers at the Kazakh National Medical University and Suleyman Demirel University.

The work requires the students to “perform at a much higher level than an apprentice,” she says. “That is, they are required to grow and develop as independent investigators.”

A Vital Tool for Economic Growth

A fourth group of Lehigh students is working with Kazakh peers and professors to develop protocols for ethical research, similar to the widely accepted Institutional Review Board (IRB) standards for research in many developed countries.

AlmaU faculty asked for help on such guidelines so that their research has credibility in academia and business in more developed countries, according to Cedrique Wafula ‘25, a Lehigh student majoring in finance and supply chain management.

William Gaudelli, dean of the Lehigh College of Education and Vice Provost for Innovation in Education, who is mentoring the research protocols project, says the students are gaining vital skills in the process.

“They are in novel and often ambiguous situations that require learning new information, applying and honing existing skills, thinking carefully about audience and context while identifying unknowns,” Gaudelli says. “This is precisely how the world comes to us, not in neat disciplinary boxes but in the uncertainty of real-world problems. The students are doing a great job in getting up to speed on IRBs globally and the importance of ethics reviews for social science and humanities research while working collaboratively in that process.”

All the student groups are set up so the projects don’t end when some members graduate or complete the GSIF program, but instead, new students join and take the work forward.

“Think about how that product solves a problem and creates value for all the stakeholders,” he says. “It’s to build organizations and structures that keep working even when they are back home. It’s about creating lasting change.”