The 2022 Education Summit brought together leading players from the education sector to discuss the future of international education in the UK, along with diversity and inclusion throughout the wider education sector.

Rajay Naik, CEO of Skilled Education, shared his thoughts on the sector’s reliance on agents and the future of pathway businesses.

“This is really well worth looking at in terms of where the market is moving of the coming years – the fact that most of the pathway enrolments come via agents and that is a massive structural risk for this sector over the coming years,” he said at the one-day, multi-track summit and exhibition, organised by Nexus Media Group.

“In some cases 90% of enrolments are coming via these agents, who the pathway providers are dependent on. That means that you’re dependent on that lot of face-to-face fairs, a lot of face-to-face conversations, a lot of very traditional routes to acquisition. That is being massively disrupted by the aggregators or the online platforms,” Naik added.

Speaking on the evolution of the international student recruitment market and the impact of aggregators, Naik – who previously worked at pathway provider Study Group – said that “they have come onto the market in a huge way” and cited ApplyBoard as “the best example of this”.

He described ApplyBoard’s business model as the “glue” at the centre of the agents and students, describing it an “attractive” model but also as one which is “massively disrupting a lot of pathway providers”.

Giving a more general view on why he feels that the international education sector in the UK has been able to bounce back post-pandemic, Naik cited Theresa May’s resignation as one reason.

“The fact that as much as she might have been a much more reasonable prime minister than others, Theresa May was a problem for international student mobility.

“UKVI and the changes there under Boris [Johnson] were very, very positive for the UK sector and that led to the massive increase in numbers from India… and that shows no sign of abating,” said Naik, referring to the reintroduction of post-study work rights.

Derrick Betts, partner at EY Parthenon, also touched upon the increase in number of incoming Indian students to the UK in his keynote speech.

“It may be the case that actually what we are seeing is a structural shift away from probably an over-reliance on Chinese students coming to the UK towards a reliance on Indian students and our Indian students are more likely to come to the UK to take advantage of post-study work rights. That is partly what is driving the shift,” said Betts.

“Crucially now we have a sector that is determined to diversify”

“We have an evolving situation. We have a situation which has been challenged. But crucially now we have a sector that is determined to diversify,” Naik continued.

Another popular topic at the summit was how the sector can continue to work to bridge the diversity gap within its workforce.

The PIE’s own search director and insight manager, Simone Rensch, said, in a LinkedIn post discussing a session on equality, diversity and inclusion, “while there’s still a massive diversity gap in the business of education, we know that companies that are diverse are more profitable”. 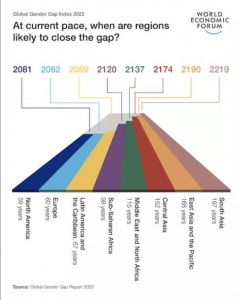 “Investors are aware of this and it’s on the agenda – at least at the forward-thinking firms,” she added.

Speaking on the panel, Lil Bremermann-Richard, CEO of Oxford International Education Group, told delegates that the gender pay gap in 2021 was 15.4%, up by 0.5% from 2020, according to the ONS.

According to Bremermann-Richard, in Europe, it will take another 60 years to close the gender gap and in South Asia, it is estimated by the World Economic Forum that it could be 200 years before the gender gap is closed.