Over 28% of primary pupils and 40% of FSM secondary pupils who qualified for free school meals were persistently absent during the 2021/22 autumn term. Lee Elliot Major and Andy Eyles write that while some of the contributing factors are known, the evidence on how to reduce persistent absenteeism is weak.

The COVID pandemic has highlighted the equalising power of schooling. We now know that COVID-induced school closures hindered learning for millions of pupils across the world (Betthäuser et al, 2022). In the unlevel playing field outside the school gates, disadvantaged pupils were less likely to access study space, computers, and educational materials (Elliot Major, Eyles, and Machin, 2021); as a result they fell further behind their more privileged peers.

Yet schooling can only equalise opportunities if children are present in the classroom. This is why official data we have analysed on persistent school absences in England during the immediate aftermath of the pandemic are so worrying. We have broken these figures down by whether children qualified for Free School Meals (FSM) or not. Pupils are identified as a persistent absentee if they miss 10% or more of their possible school sessions where a session is defined as half a day. This amounts to at least 7 days of schooling in the Autumn term from which data are drawn. The results are presented in the two graphs below for primary and secondary schools during the autumn term for the last three academic years. 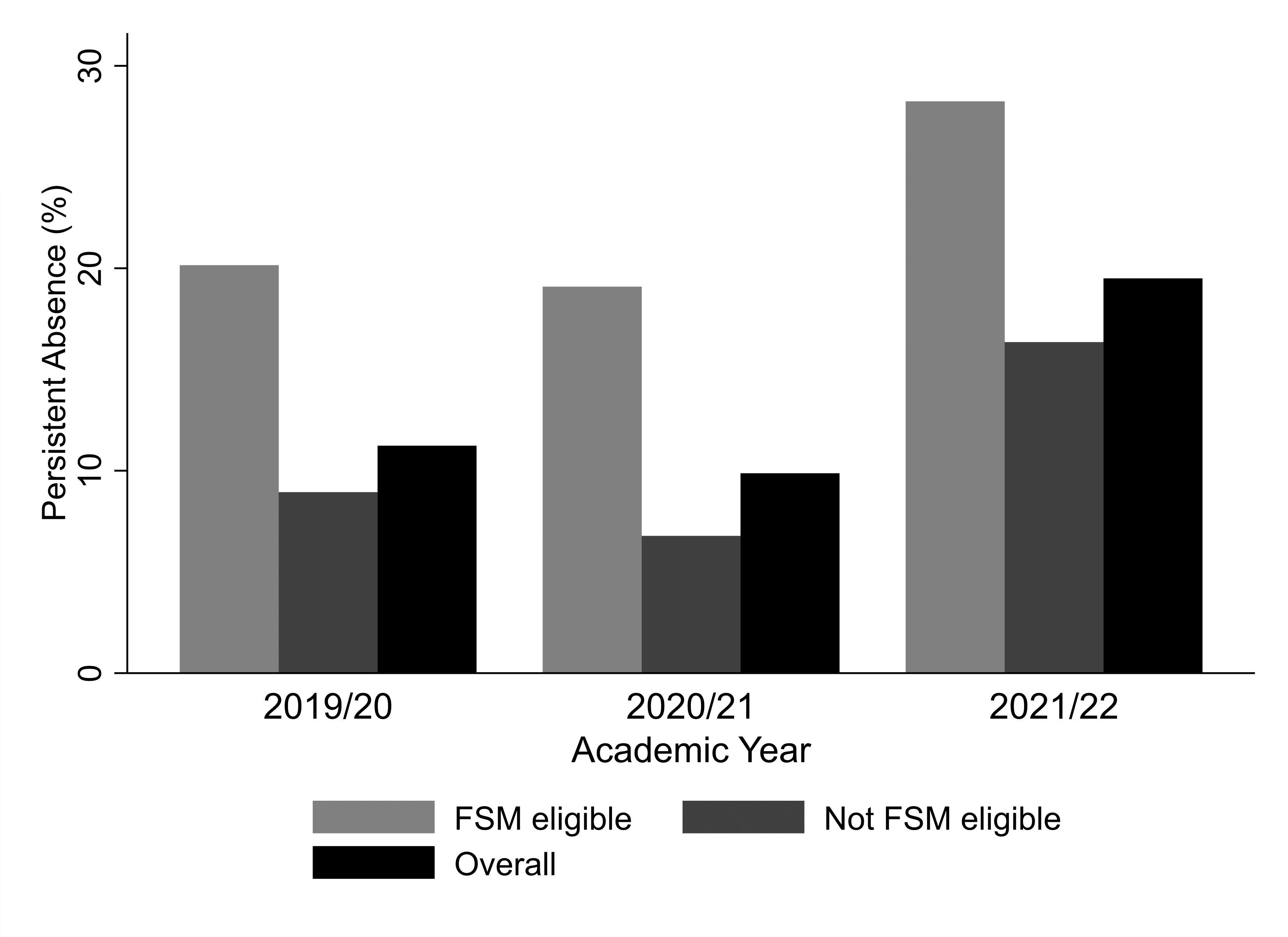 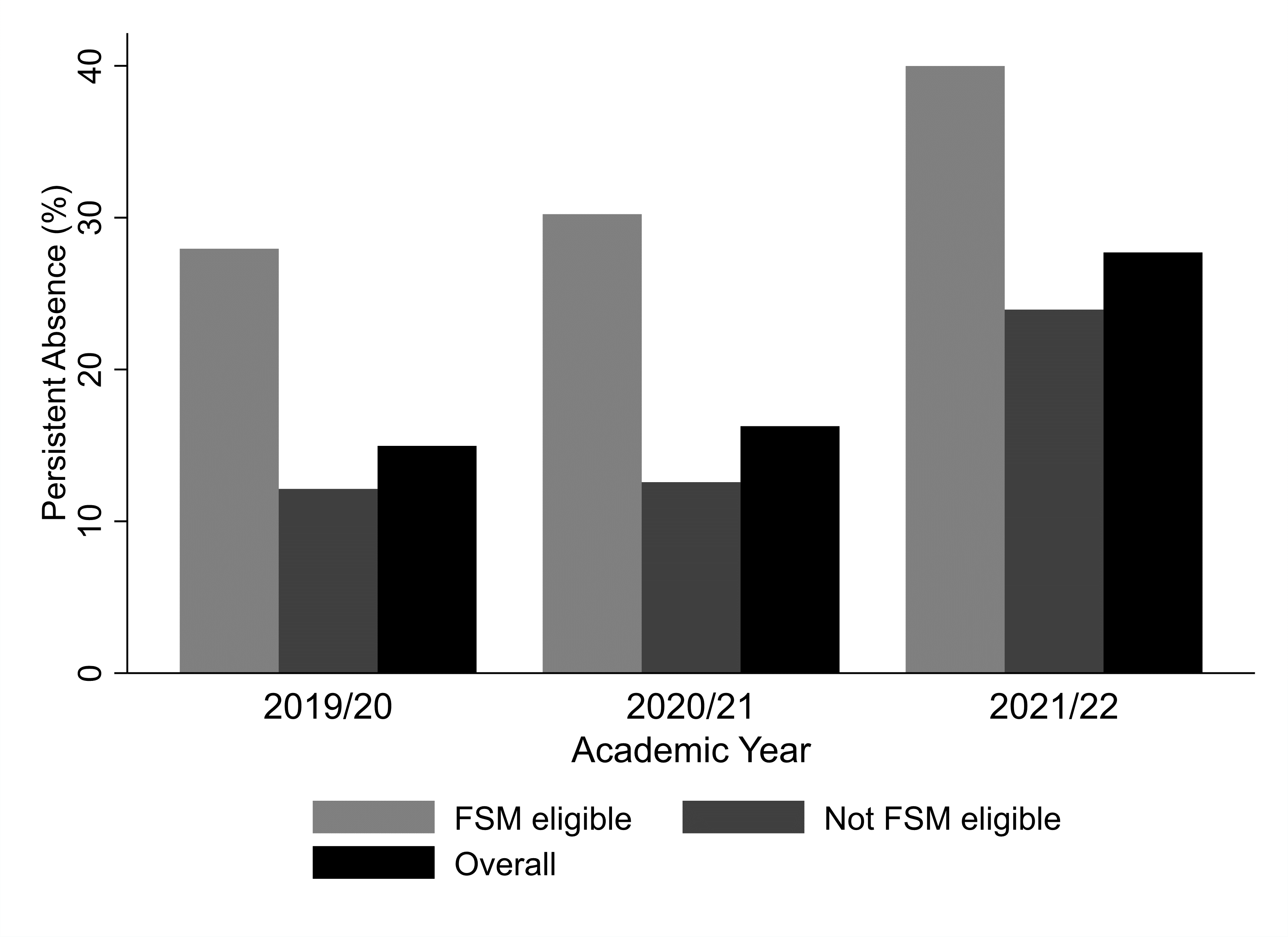 Behind these proportional gaps are scarily big numbers. A total of 538,427 FSM pupils were persistently absent in the autumn term of 2021/22. In total, 1,595, 582 pupils in England’s primary and secondary schools had missed a significant number of school days. This is out of total of just under 7 million pupils. As teachers will tell you, many of the extra million absentees who are not on free school meals are nonetheless facing real hardship outside the school gates. In the current cost of living crisis many more pupils have come to be known as the ‘hidden’ poor.

Estimating the costs of absence

Teachers know only too well the link between attendance and attainment in their own classrooms. Robust studies demonstrate this relationship at national and international levels. Using OECD PISA test data, for example, Lavy (2015) suggests that an extra hour of instruction per-week over the course of a school year increases educational attainment by 0.06 standard deviations. A recent randomised trial finds a much larger increase of 0.15 standard deviations (Andersen et al, 2016).

These estimates allow for a back of the envelope calculation of the effect of persistent absence on attainment. The most conservative assumption is that persistent absentees miss 10% of their sessions. This amounts to students missing 39 half day sessions over the course of the year. The average pupil, pre-COVID, missed between 4% and 5.5% of all sessions depending upon their stage of schooling. The difference in absenteeism between the persistently absent and a pupil who missed 5% of all sessions would then be expected to lower attainment by between 0.09 and 0.23 standard deviations. Using a standard approach to translate these figures into months of learning (Higgins, 2018) this equates to two to three months of learning lost among persistently absent pupils.

These calculations suggest that increased absence rates have the potential to significantly reduce attainment for absent pupils. Statistics for the first weeks of the 2022/23 academic year reveal higher attendance rates than last year although still lower than pre-pandemic levels. Individual trusts however are reporting that half of their poorer pupils are still persistently absent. We won’t be able to confirm these rates nationally until later this year.

There are many reasons why so many children have not returned to school following the disruption of the pandemic. Some have experienced crippling anxiety and a loss of social and academic confidence. Others have been struggling to pay for bus travel. Perhaps most troubling of all, some families appear to have lost their belief that attending school regularly is necessary for their children. Some parents are openly questioning whether the return to schooling is needed, given that results were so good last year, when many pupils were absent due to COVID.

Unfortunately, the evidence on how to reduce persistent absenteeism is extremely weak. The Education Endowment Foundation has suggested sending personalised letters and text messages to parents. Children’s Commissioner Dame Rachel de Souza has urged teachers to intervene quickly during the first week to spot children at risk of falling persistently absent. A national army of education welfare officers are chasing missing pupils with phone calls and home visits. The most successful schools are putting huge resources into home visits. Mentors are also being trained to support pupils. Financial penalties for parents meanwhile are being levied at different rates across the country.

The stakes for the pandemic generation could not be higher. Statistics released last week revealed widening socio-economic gaps in assessments among 7 year olds. Our analysis of recently released statistics for end of primary school tests taken in the summer confirm that attainment has fallen across the board at age 11. There is also evidence of a growing socioeconomic divide. Below we show the trends for achieving national benchmarks in maths. These are broken down by girls and boys and whether children have at any time been eligible for free school meals. These figures are worrying as we know that falling behind in earlier years is strongly predictive of failing GCSEs at age 16 (Elliot Major and Parsons, 2022). Our Nuffield Foundation project will analyse how widening inequalities in education caused by the pandemic are likely to impact the life prospects of under 18s. All this suggests that getting children back to school should be a national education priority. 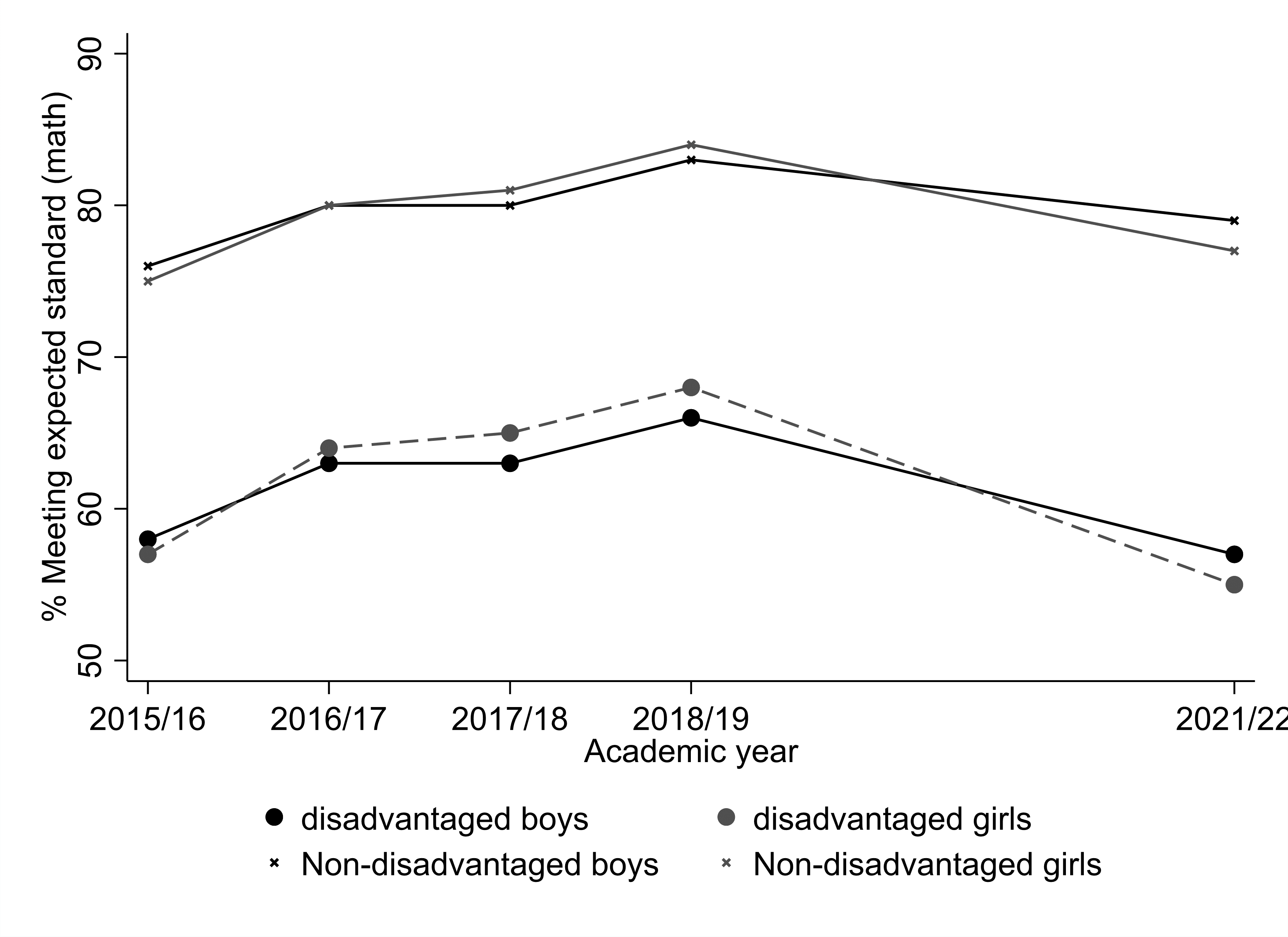 Lee Elliot Major is Professor of Social Mobility at the University of Exeter and an Associate of the Centre for Economic Performance at the London School of Economics.

Andrew Eyles is a research economist in the Education and Skills programme at the Centre for Economic Performance, LSE. He is also a PhD (Economics) student at University College London.