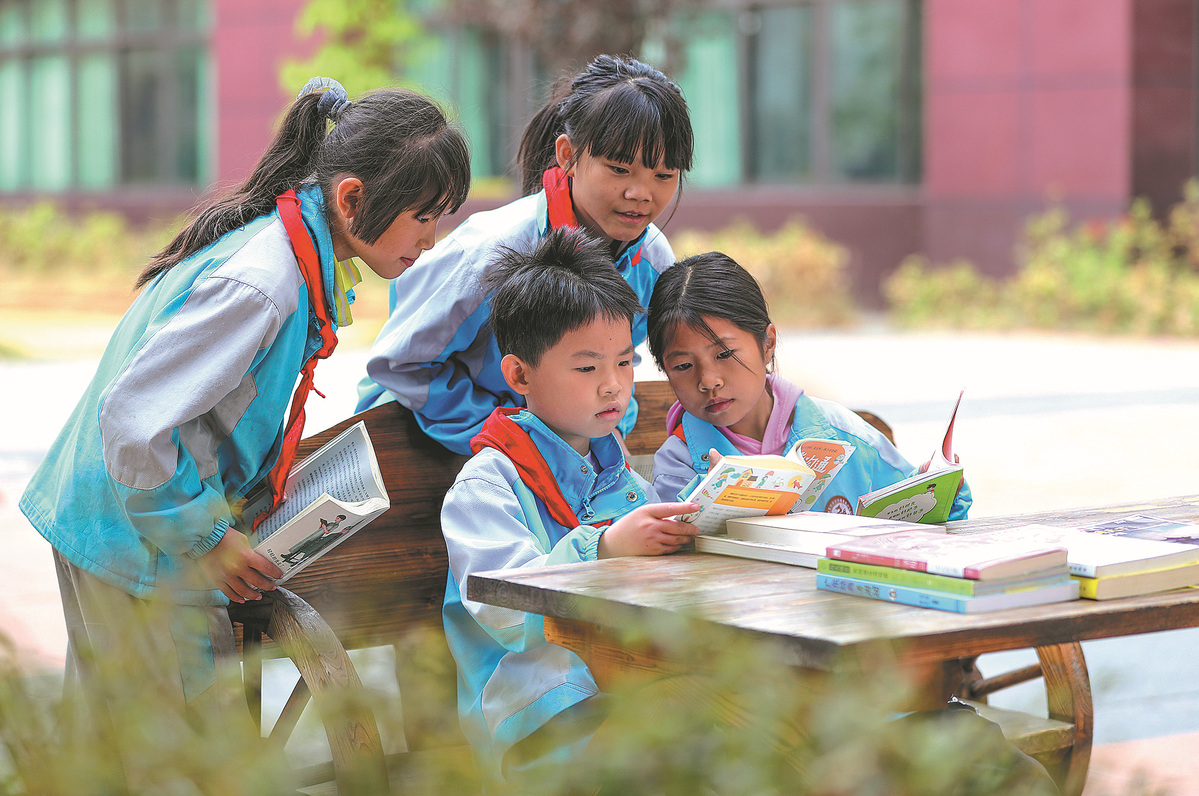 The report that Xi Jinping delivered to the 20th National Congress of the Communist Party of China serves as a road map for the country to further promote education equality and make sure all students enjoy the same opportunity to shine, teachers and students said.

It called for accelerating high-quality, balanced development and urban-rural integration in compulsory education, promoting digitalization and improving the financial assistance system so it covers students at all stages of schooling.

Liu Xiuxiang, a delegate to the 20th CPC National Congress and vice-principal of Wangmo Experimental High School, said he is deeply motivated by the report, which reaffirmed his confidence in the development of rural education.

He feels very proud to have witnessed the development of the country in the past decade, as it has enabled all students to receive education, he said.

“In the future, all students will have access to high-quality education and I am willing to work with other rural teachers to further develop rural education.”

In 2008, Liu shot to fame after he took his mother, who has a mental illness, from Guizhou to his college in Shandong province to look after her.

Liu’s father died when he was four years old and his elder brother and two sisters left home for work when he was 11 and he has since lost contact with them.

After he graduated in 2012, he declined an offer to work in Beijing and returned to his hometown to become a teacher.

The infrastructure in rural areas has improved greatly and more investment can be expected in the next five years or more so that more children living in mountainous regions can receive better education and have more choices to change their lives, he told China News Service.

According to the Ministry of Education, a national enrollment project launched in 2012 has enrolled more than 950,000 rural students over the past decade into the country’s key universities by accepting lower scores in the national college entrance exam, or gaokao.

As part of poverty alleviation efforts, the country has realized dynamic-zero dropouts for primary and middle school students, while financial aid was given to students with financial difficulties almost 1.3 billion times in the past decade, the ministry said.

Zhang Guimei, a delegate to the 20th CPC National Congress and principal of Lijiang Huaping High School for Girls, said she was in tears when she heard the report.

The high school, founded by Zhang in 2008, is the first free high school for girls in China. Around 2,000 girls at the school from impoverished families in Yunnan’s mountainous regions have been enrolled at universities.

In the past 10 years, the Party and government have worked hard to make sure all children can receive an education. For children in mountainous regions, education is the only way for them to change their destiny, Zhang told China Central Television.

Zhang said she hopes that all children in rural areas can receive a good education and she will work tirelessly toward the goal.

Yang Rujun, an undergraduate student at Tsinghua University, said many students from her hometown in Dehong Dai and Jingpo autonomous prefecture, Yunnan province, have benefited from favorable education policies for rural students.

In 2012, when she was in fourth grade, she got the opportunity to visit Shanghai during summer vacation as part of government-organized study tours for students in Yunnan and the Tibet autonomous region.

She visited iconic landmarks and met with local students.

“That trip had a huge impact on me, as I knew that as long as I study hard, I will have the opportunity to see the wider world,” she said.

She has also witnessed the huge improvement in educational infrastructure and teachers in her hometown in recent years.

While computers and multimedia equipment were rare when she was in primary school, since she went to high school they have become commonplace, and there have been more teachers from well-known universities teaching at her old high school, she said.

The prevalence of digital educational resources and more young teachers graduating from famous universities will continue to help bridge the gap between urban and rural education, she added.