A private-sector English-speaking test will be introduced at the Tokyo metropolitan high school entrance exam for the first time in Japan this month, but the initiative to nurture “speaking skills” faces stiff opposition from some parents and education experts questioning its fairness.

The test will be implemented for the entrance exam on Nov. 27, targeting almost 80,000 third-year middle school students in the capital who wish to attend metropolitan high schools from next April. Speaking test scores will be added to the overall scores of the entrance exams, being held next February.

Some parents and experts are demanding that the test be called off due to the need for more transparency on who will score it and the standard for deducting points. 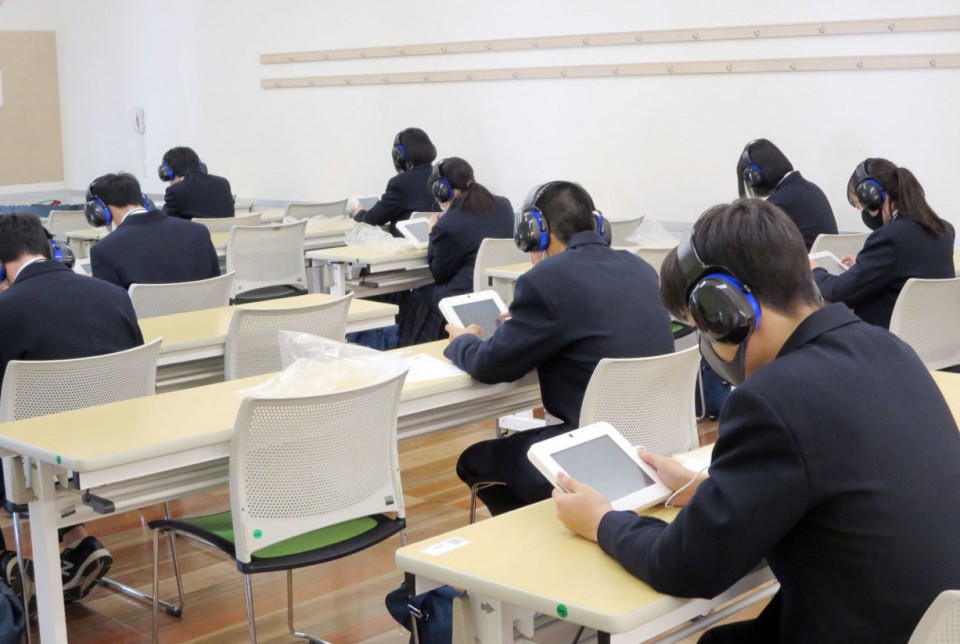 Students take a mock exam to test English-speaking skills in November 2020 in Tokyo ahead of the subject’s incorporation into the entrance exam for metropolitan high schools. (Photo courtesy of Tokyo Metropolitan Board of Education)(Kyodo)

“I have tried to create an environment where speaking English is normal,” said Hiromi Maeda, 48, the head teacher at the junior high school.

According to the Tokyo Metropolitan Board of Education, the test was jointly created by the education board and education services provider Benesse Corp. Scoring will be conducted by the local staff of a company affiliated with Benesse in the Philippines.

According to the board, the roughly 76,000 students who have applied to take the tests account for around 95 percent of third-year public junior high school students in Tokyo.

Students taking the test will don headsets with microphones and record verbal answers to eight questions shown on tablets. They will also wear earmuffs to shut out noise.

The students will be scored on a six-tier scale for grammar and pronunciation, among other aspects of speaking ability, with “A” being the highest and “F” the lowest.

An “A” is worth 20 points, while an “F” would add zero to the total score of next year’s entrance exams, which include an achievement test with a possible total score of 700 and a school report with a maximum of 300 points.

For those who miss the speaking test due to illness or other reasons, the scores are calculated by averaging the speaking test results of students with the same level as the absentee’s English score on the achievement test.

Worried about fairness, parents and education experts against the speaking test have launched a petition drive to urge the metropolitan government to halt its implementation, collecting more than 23,000 signatures as of Nov. 11. A request for an audit has also been presented to the local government authority.

“Who will mark the answers of some 80,000 students? The scorers are likely not aware of grading criteria, and I think it would be difficult to score it fairly,” said a 52-year-old mother of a second-year junior high school student in Tokyo’s Bunkyo Ward.

Because English teaching levels at junior high schools in Tokyo vary widely, “Students who have prepared well at cram schools will be at an advantage,” said another 53-year-old parent.

Some also call the treatment of students who skip the test due to illness or other reasons unreasonable. They say students may think it is better not to prepare and receive a “virtual” score by sitting out the exam.

The opposition to the English-speaking test is a reminder of when the government put off the planned introduction of private-sector English proficiency tests as part of Japan’s standardized university entrance exams launched in fiscal 2020.

At that time, critics said using private-sector tests would discriminate against students living in remote areas and questioned the lack of support measures for disadvantaged households.

The Iwate prefectural government previously introduced an English conversation test on entrance exams for prefecture-run high schools in fiscal 2004. However, it was canceled after three years due to lengthy waiting times for students taking the tests.

The Fukui prefectural government also experimentally tested students using Benesse’s English exams in fiscal 2018 and 2019 but decided to wait to adopt them formally due to issues such as the extensive time taken to grade them.

In refuting the opposition, the Tokyo education board said it has “steadily” prepared for the tests by conducting three mock exams.

As for the grading, an education board official has said fairness would be ensured as “multiple people will mark the exams, and if the scoring differs, a senior person will make adjustments.”

Misato Usukura, an associate professor at Tokyo Gakugei University who specializes in English language education, said to improve students’ English skills, teachers must undergo training first to improve how the language is taught in schools.

If the English-speaking tests are to be incorporated into high school entrance exams, “they should dispel worries by making the grading open, such as by publishing the answer examples for each evaluation,” she said.