As if pupils and their parents haven’t suffered enough due to pandemic lockdowns keeping them at home for weeks on end – now teachers’ strikes this spring will dent their education even further, especially when important exams are coming up. 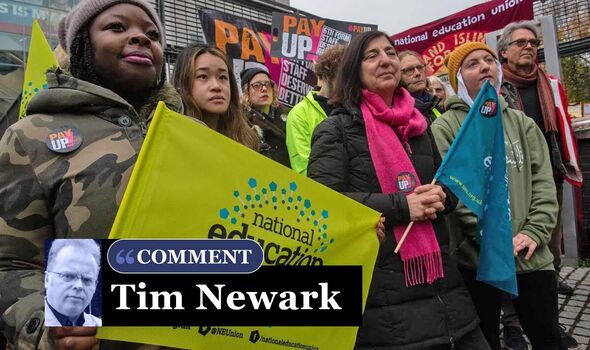 Teachers in the National Education Union have voted to strike for seven days between February 1 and March 16, possibly closing as many as 23,400 schools in England and Wales. That’s bad news for parents who yet again have to take time off work to look after their children, thus having an impact on the wider economy.

Striking teachers say with some enthusiasm that the process of “remote learning” is already set up thanks to Covid, but that was a dismal time for families.

Absenteeism has doubled since before the pandemic and with it comes a rise in children at risk of abuse and criminal exploitation.

Last year, it was reported that 1.8 million children had missed at least 10 percent of their education and 122,000 have not attended half their lessons.

Breaking the regular rhythm of lessons is one of the most damaging impacts that can be inflicted on children.

“I started saying ‘I’m going to school’ and would just go somewhere else for a few hours,” one Wirral 15-year-old told the BBC.

“Then, when lockdown came, I did no work and I got even further behind than I was already. I had big gaps in my knowledge and that was dead hard to fill.”

Schoolchildren were the least likely to suffer badly from Covid and yet lockdown punished them most. Now a string of strikes will further dislocate them from schooling.

Recovering from the impact of such damaged education should be the priority of teaching unions, who too quickly called for pandemic school closures in the first place.

Teachers are already paid above the average wage, with most earning nearly £40,000 or more – while head teachers on average receive £95,000.

In the autumn statement, the Government announced an extra £2billion for schools and the latest pay awards give junior teachers a rise of 8.9 percent, while most other teachers will receive a 5 percent lift.

Of course, this is half the current inflation rate, but awarding pay increases above or close to that only entrenches inflation in the economy, costing us all more in the long run.

As public sector workers they also receive more generous pensions, with employer contributions of 23.6 percent compared to less than 4 percent in the private sector. And of course, there is the perk of long holidays and constant inset days catching out parents, with days off for training and planning.

As always, it will be the poorest families who suffer most, with no access to private education or catch-up schooling.

A University of Bedfordshire report revealed the impact that a lack of class time had during lockdown, reading: “Indications from schools’ reading assessments are that Key Stage 1 pupils (five to seven) were the most negatively impacted, with 44 percent of pupils behind expected literacy levels.

And 71 percent of these children had been set back in their reading age by three months or more.”

Worse was reported by the NHS in 2022, who said the “number of referrals of children and young people to mental health services increased by around 77 percent compared to before the pandemic, with the numbers waiting for urgent support with an eating disorder 92 percent higher than the same time last year.”

Further disruption is the last thing such pupils need as they struggle to return to normality.

Education secretary Gillian Keegan is quite right to say that teachers do not need to go on strike to get her attention. “Talks with union leaders are ongoing,” she says, “and any strike action from one union will have a damaging impact on pupils’ education and wellbeing, particularly following the disruption experienced over the past two years.”

Families have put up with a lot since 2020 and, as the taxpayers who ultimately fund teachers, they deserve a lot better service for their hard-earned money.

Quite rightly, Ms Keegan says the priority of government must be to halve inflation this year, so it must stay firm in resisting inflation-triggering pay rises across the public sector.

We all suffer from the cost-of-living crisis but some unions seem to believe they are special cases. They are not and should appreciate the job security they already have before inflicting yet more misery on us all.

England, says TIM NEWARK, Teachers seem to think, think they’re in a class of their own

Mis tuits
Teachers seem to think they’re in a class of their own, says TIM NEWARK – Sarraute Educación María Magdalena

Sarraute Educación Teachers seem to think they’re in a class of their own, says TIM NEWARK
A %d blogueros les gusta esto: