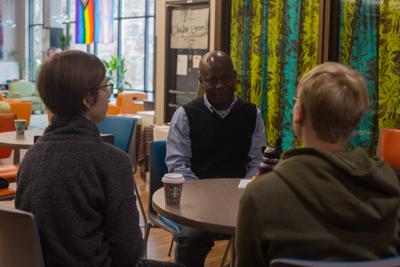 Paul Mwimgwa, a delegate to the world refugee council, speaks to UM students as part of a coffee talk on Human Rights during International Week Nov 16. “For me, human rights are (about) saving lives,” Mwimgwa said. “In America, human rights is (a) participation job, everyone has to put in something to save lives.”

Students gathered to celebrate their international status, the experiences they’ve had in the United States and the programs that allow them to study at the University of Montana in International Education Week Nov. 14-18.

“International Education Week is a nationally recognized event to celebrate everything relevant to international education in the USA. UM has a really good track record to celebrate it in a big way,” Global Engagement Team program coordinator Mona Mondava said.

The Global Engagement Office held numerous events Nov. 14-18 to celebrate the presence of international students on campus. The office was short-staffed this year, so they partnered up with various UM offices to incorporate International Education Week.

The Global Leadership Initiative (GLI) of UM held “Coffee Talk: Inequality and Human Rights” where Paul Mwingwa, an official of the International Rescue Committee in Missoula (IRC) spoke to the students about the human rights situation in the U.S.

“In America, human rights is a participation job, everyone has to put in something to save lives. It’s particularly difficult for international students to start from here and make a permanent place in this country.”

Something Clément Cherblanc, a master’s student from France, resonates with.

“I’m a white guy, so things have been easier for me than most other people. But Montana is too white of a state, I miss having some diversity around me sometimes,” Cherblanc said.

Cherblanc arrived as an exchange student in 2021 in the Geology department. After having Joel Harper as a professor and mentor and finding his degree means a lot to him personally and professionally – he decided to pursue a full-time master’s degree here in geology.

“The American and French education systems are very different. I think the facilities that I’m getting here and the opportunities that the degree would propel after I graduate are worth a great deal,” he added.

Akane Imayoshi is an undergraduate exchange student from Japan studying English and journalism. She first came to Montana back in 2018 as a high school student visiting under the “Montana/Kumamoto Sister State Relationship” program from the Mansfield Center. She fell in love with UM and was determined to come back again.

“We took English lessons at the University, stayed in Aber Hall and roamed around Montana for three weeks. I knew I wasn’t finished then, so I applied for the scholarship and came to UM to fulfill my dream,” said Imayoshi.

Montana celebrated the 40th anniversary of a sister-state relationship with Kumamoto, Japan last week. Montana’s sister state relationship was first proposed in 1979 by former US senator and US Ambassador to Japan Mike Mansfield after he visited Kumamoto. In 1982, Mansfield’s vision became a reality and the two states began an official relationship. Since then, the relationship has been both economic and cultural with multiple student exchanges.

“This year we don’t have much staffing right now as we would have five years ago. But we partnered with other UM departments to accommodate activities centering around international education,” Mondava said. “This week highlights the contribution the international students make on our campus.”

Nature, people and the simplicity of a small town are some of the main benefits to living in Missoula, according to international students.

For Juhi Singh – a freshman from India – the journey has been a roller coaster ride. It was a difficult change for her to settle in at first, but she’s felt well supported through UM and especially through events like this.

“Now I feel more acquainted with the place and the people. The international community has made me feel very warm and welcoming, now more than it felt at first when I didn’t know my way around,” said Juhi.